06:55 Saturday
The alarm sounds and it's time to roll out. Never mind the 5.5 hours’ sleep. My flatmate, this website's proprietor, ranks the explosive efficiency of my morning routine up there with turn-one Mox into Sol Ring into Fellwar Stone, so we're good to go in no time at all! 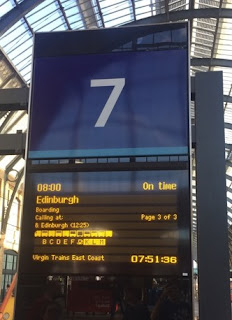 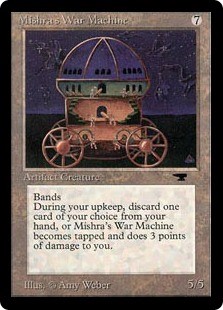 An artist's interpretation of the Virgin Train to Edinburgh

07:59:30
We depart, surprisingly ahead of schedule. I nestle down into my standard-class seat with my Prêt coffee and sandwich (which are quickly dispatched) before indulging in an eighty-minute nap. 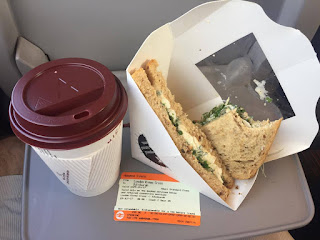 09:50
Having awoken, but not having the space across two seats to set my cards out for a fine-tune of my deck, I read several Magic articles before inevitably succumbing to boredom and heading to eBay to acquire a couple of mis-cut cards for my cube, taking advantage of the final hours of a Nectarcard points promotion!

11:30
The train has thinned out and I fine-tune my 75 for the tournament and give some thought to sideboarding. The expected meta is black-bordered and nostalgia-filled, but otherwise unknown!

I am playing The Deck which is ostensibly the original control deck in Magic, heavily UW splashing RGB. 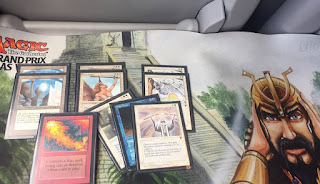 12:20
The train rolls into Edinburgh. After a brief sojourn into the tourist information office to collect some timetables for my timetable-obsessive father (don't ask!) I head over to the venue in good time for the 1pm start. Naturally I expect the tournament will start late in any event, in the tried-and-tested fashion...

There are 8 of us, so 3 rounds of Swiss, then a Top 4. But to create more Magic, a "quarter-final" has been built in. The first placed player gets an automatic berth in the semi-finals, with places 2-7 battling it out in single-elimination to fill the other 3 semi-final places. The prize pot was £80 - divided £50/£30 between the finalists...

Round One 2-0 vs. Sebastion on Grixis Aggro Dreams

Sebastion is one of the pillars of the UK Old School scene, and had feathers positively in his cap, having won a tournament in Birmingham in the spring. As such I was expecting a tough match-up.

Game One
A relatively tense opening saw a Black Vise do some early damage before being Disenchanted. I was able to establish mana rocks but was somewhat light on Factories. Sebastion had seen several creatures either countered or sent to the farm, but had a Shatter for my early Jayemdae Tome.

Running low on card advantage, I plumped to Timetwister despite the risk of recycling Bolts etc. for Sebastion. I was able to Twister into some reasonable spells, a Balance included, however unwittingly allowed Sebastion to set up a Demonic Tutor into Mind Twist to take my hand away! Sebastion compromised on developing his board (as one would) to Mind Twist, however this would be an unfortunate line as I promptly top-decked my own Mind Twist and decimated his hand, hitting several threats.

So we were weaponless again. However it would not be for long, as I drew into Jayemdae Tome (was it ever thus?) and took control of the board. Sebastion meanwhile was drawing 3 Black Vises, which unfortunately did little as I was able to empty my hand of non-counters and manage a hand size of four or less. This did lead to an interesting moment where Sebastian tried an Ancestral Recall targeting me for what would have been a lethal 9 damage, pushing my hand to 7 at the end of his turn. However I had the Counterspell and shortly after a huge Fireball ended the game. 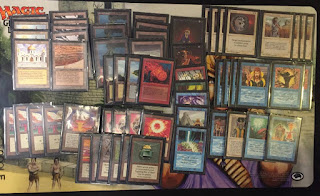 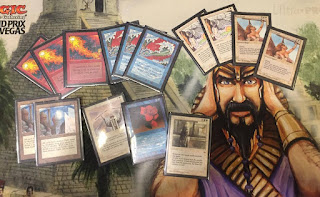 Game Two
This game saw a more aggressive start with two Black Knights from Sebastion. However I had the perfect answer in a split Fireball to kill both.

I was here able to establish a lock of sorts, with Greater Realm of Preservation and Jayemdae Tome enabling me to edge ahead. Using two Hyppies, Sebastion could deal with one Serra Angel, but not the second! Game two ended shortly thereafter. 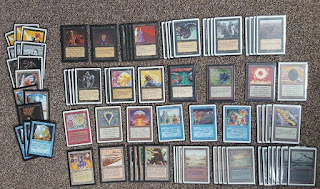 Match 2 - 2-1 vs Bryan Connolly on ErhnamGeddon

Game 1 saw Bryan establish a clock with Argothian Pixies, despite my having drawn counters/removal to deal with a pair of aggressive early Savannah Lions. I was struggling to establish my board presence whilst dealing with these threats, and was quickly left "needing a Balance" after a Serendib Efreet hit the table. With my life total dwindling rapidly, an Armageddon from Bryan saw me scoop.

Game 2
Bryan had a less aggressive start in game 2, which coupled with a timely Counterspell on an Energy Flux moved the pendulum towards me. A painful Mind Twist saw me then take command, before eventually drawing an out – a Serra Angel - that saw me over the finish line.

Game 3
The most concerning game with Bryan on the play post-board. I was able to deal with early threats before starting to chip away with Factories. Fearing an army of Djinns, I'd resolved a City in a Bottle, and crucially could out-draw Bryan with Tome. Being able to trade one-for-one with Bryan's threats I could then slowly inflict enough punishment with the Factories. 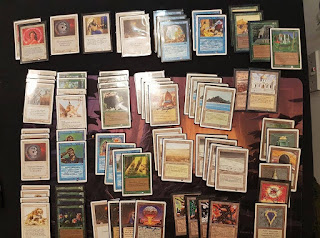 Game 1 saw a long period of draw-go, as the growing manabases of two black-border purists stared menacingly at each other from across the playmats. A pattern emerged with Rod either Swordsing or Disenchanting my Factories and me Swordsing his Trolls.

Unfortunately for Rod this meant that he was not putting me under any pressure. This led to my restricted cards doing what they do best. With Counterspell back-up I Braingeysered for 4, and then took three turns in a row off Time Walk into Recall fetching Time Walk, developing my board to epic proportions. Then like an anaconda squeezing the life out of its prey, I was able to use my Tome draw engine and edge ahead, with a grip of answers and disruption.

Rod fought on valiantly, seeing for instance a Disintegrate for 9 Mana Drained, before I locked up the game with a huge Fireball. 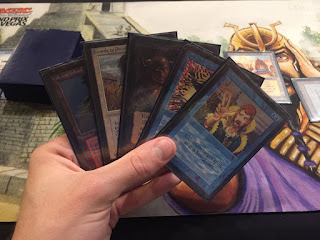 My keep in game 1

Game 2 saw Rod stutter on mana early, meaning that my Chaos Orb, Stone Rain and Strip Mine did brutal work. A pair of Mishra's Factories then quickly put the game away before Rod could recover. 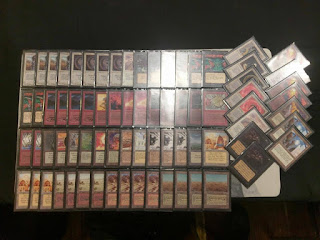 Being top of the Swiss at 3-0 meant that as top seed I had the honour of an automatic berth in the Semi Finals, whilst places 2-7 fought on in single elimination games to fill the remaining three places... 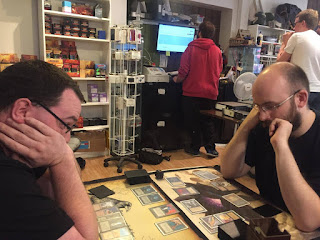 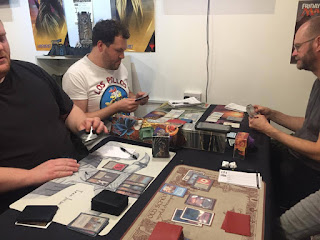 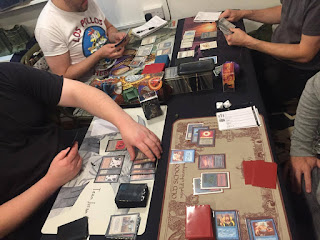 Bryan is a skilled veteran operator, and probably my toughest opponent of the other semi-finalists (Rod had graciously knocked out the UR player, Karl!). So my heart sank a little being paired against Bryan, knowing that I would have to go through him (again!) to make the final.

Game 1 saw early Savannah Lions apply early pressure. Despite it being likely suboptimal, I was forced to Timetwister in search of answers. Suffice to say they didn't appear and I was duly 0-1 down.

Sideboarding was interesting here, as I wanted to keep my City in a Bottle threat. However by this point it seemed unlikely that Bryan had all his Arabian Nights fatties in his deck (if any at all...) Moreover he appeared to be favouring a more controlling build, relying on his white creatures and disruption towards my manabase via Energy Flux. However the City in a Bottle had such potential potency that it had to stay in...

Game 2 was probably the most interesting- I traded answers for early creatures, before an Energy Flux caused both our manabases issues (however my manabase moreso), and I was forced to sacrifice my Tome after only one draw. Unfortunately for Bryan he had "gassed" and seemed to stop drawing threats. So I was able to pick off his Energy Flux with a Disenchant and then go to work with a second Tome.

It seemed very much a game of marginals. For example, we exchanged Mind Twists, but I probably hit the more significant cards. I was also able to draw a two-for-one with Balance to take out several threats in one hit. Ultimately Bryan seemed to run out of creatures, and without an Armageddon landing, died at the hands of a Factory and a Serra Angel.

Game 3 saw my most broken start in recent memory. A hand of 3 Moxen, Black Lotus, Regrowth, Mind Twist saw me Mind Twist Bryan for 6 (his entire hand) on turn 1.

A devastating play, but his response, a turn two Savannah Lion off the top put me under early pressure, as I lacked the Factory nor a Swords to deal with it. I established my Tome and was drawing two cards each turn. However whilst I could counter additional threats the Lions continued to scratch away at my life. Finally on 6 life, after 7-8 turns, salvation came in the form of a Factory! Not wanting to fall any lower I immediately took the trade.

From there, now with two Books doing the Lord's Work, I moved further ahead, although I did fall to 2 off an end-step Psionic Blast from Bryan whilst I was tapped out.

From there I set-up the kill with counter back-up with Demonic Tutor and moments later an enormous Fireball for 13 put me into the finals! 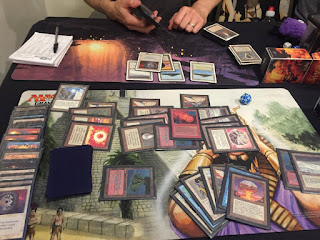 What a Fireball for 13 with counter back-up looks like

Our first game was unnervingly similar to our previous game 1. Rod was unable to exert enough pressure early, before succumbing to the vice-like grip of the Tome, which provided me with unrivalled card advantage.

This time I was able to protect my Factories, before producing a Fireball for the win.

Game two saw me mulligan to 5, but fortunately into a hand with Ancestral Recall, almost immediately restoring parity with Rod in terms of cards in hand.

I was somewhat choked on lands, but had a vital Balance in hand. This was to prove devastating, as I set up a Tome on board, whilst opposite Sedge Trolls were amassing and each dealt me three damage a turn. My plan was to Balance to leave us with 0-1 cards in hand, but with my Tome handing me the advantage in an empty board. This worked perfectly, with Rod losing his Trolls and 5 lands (due to the 3-8 land disparity).

From there, the Tome saw me race ahead, with Factories drawing the concession soon thereafter.

I was duly crowned King of the North! 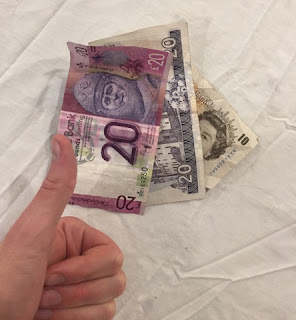 I was particularly chuffed: this was my first victory in a tournament outside of a GP side-event, having made the semi-finals in several. This win also comes with an invitation to Noobcon 10 in April next year, where I will be representing the UK!

An aside to congratulate Rod on organising a great event. Rod had done much of the initial publicity and had generously donated an Unlimited Jayemdae Tome to the prize pot, which was randomly assigned to one lucky Karl Hagan by way of a die roll!

It is a testament to the UK Old School community that people are prepared to travel across the country to play in events like this, in truth not because of the promise of exorbitant prize support, but to socialise and indulge in a much-loved format with like-minded friends who "get the joke". Long may it continue.

My congratulations also to Gabor on hosting a great event and firing a sanctioned Old School tournament at the first time of asking. The players were made to feel very welcome throughout the weekend. Even if you do not play Old School, I would recommend checking out a tournament at Mox in the Hole if you are ever in the Edinburgh area. 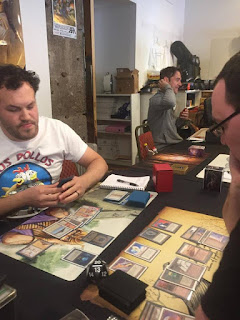 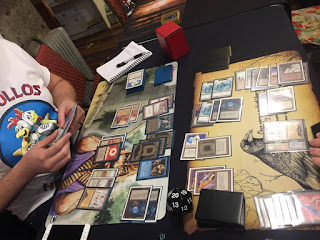 Some other action shots of Ben vs. Chris in the Swiss. Amazingly innovative decks and check out Ben's beautiful altered Howling Mines!
Posted by Jonas T at 5:04 pm