The first chapter in an occasional series where members of the London community reflect on their experiences coming out of Magic retirement to play Old School.

I hadn’t picked up a Magic deck for 18 years. I’d glanced through my folders a few times while having a sort-out, but hadn’t slung spells in anger or even mild disapproval since the last century. And then I found Old School...

But rewinding to before that, I can remember vividly when I fell out of love with Magic. It happened in a pub in Liverpool where I went an event that had been billed as friendly meet-up. I’d just moved to the city and was looking forward to meeting some new people.  I took along my mad multicolour deck, packing all 9 dual-lands, dragon legends, and dragon arches.

I went in, I sat down, said “Hello” to several people who barely acknowledged my existence ( I wasn’t a clique member) and finally managed to coax someone into giving me a "friendly" game. He was probably 17, not friendly, and beat me in three turns… and smirked. He didn’t laugh at me, or say “Unlucky, do you want to try again?”, he just smirked at me. I decided to move on. I left the pub, left the game, and didn’t look back. 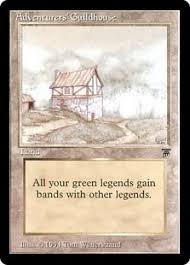 The model for a welcoming Old School community

It wasn’t just that experience. I’m a big boy and not a particularly bad loser - it just added to a growing recognition that I couldn’t afford to keep up with the release schedule, a new set every three months or so, and anyway I had the Star Wars CCG to play (of which more later).

Rewinding again to the very beginning, I’d been introduced to Magic in 1994, through friends, one of who had been given a black lotus for winning one of the first UK championships (in a deck without one… imagine that!).  I enjoyed introducing others to the game, but I had put my cards away and found other things to do with my time (again, imagine that!!).

Magic had always been a social activity for me, playing ten-player games in the pub, making new friends and using all the cool cards, not just the ones that could kill your opponent as fast as possible. I missed that side of magic in the late 90s. I also loved SW:CCG, getting a card fix with all the characters from my youth. I played that a lot and met many people who I still consider friends. Then that game died, and my life changed. I grew up, got married, and had a family.

Then one day I saw a Facebook friend, Brother Scott, whom I’d met playing SW:CCG, (I told you that would reappear later), was going to an “Old School” Magic event - COPCON III. I liked the sound of that, but didn’t know what it was. So I looked it up (what did people do before the internet?) and when I found out there was a place I could use all my old Magic cards again, I thought it worth a go. I’d know at least one person there.

I went to COPCON IV, and had a blast. My deck wasn’t that competitive, a Red and Green aggro build with no power and three Taiga probably isn’t going to be, but I did win one match, and I had fun. Remember that? That’s why we all started playing Magic in the first place, right?

I met new players, who welcomed me with metaphorical open arms, and who loved the “flavour” of the cards in my decks, (anyone for Cat Warriors?). I won the Brothers Of Fire for most original deck in the competition, and I rediscovered why I loved the game in the first place. And that’s what Old School is about for me. 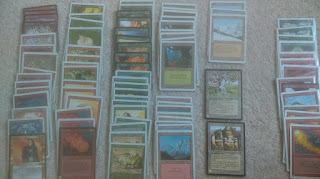 I’ve never felt an emotional connection to the new card design.  I don’t want to start buying new packs (although I miss the thrill of opening them), but I am happy to pick up a few of the cards I wanted but never got when I was a student. I’m going back to COPCON V on Saturday, this time with four Taigas and two (Chronicles - let’s not get too carried away!) Cities of Brass, as well as a few other reasonably-priced improvements to the deck.

I’ll let you know how it goes! 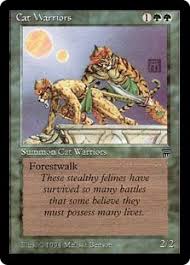 Editor's note: Thanks to Robert for his article - we're looking forward to seeing some new faces at this weekend's COPcon V.
Posted by Jonas T at 1:09 pm No comments:

“In Praise Of” Part 4: Underworld Dreams, by Brother Scott

Long before Obi-Wan Kenobi and Anakin Skywalker duelled their lightsabers atop a rock floating on a river of lava, a similar location played host to the curious sight of a blond medieval merchant trying desperately to convince an official with a red iPad to not issue them with a parking ticket. 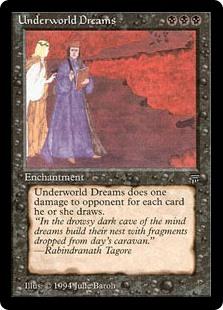 “Honestly officer, that sign is so confusing about where I can park my caravan for the day”

But even if you don’t want to play Underworld Dreams for the art, there are a lot of good reasons to play it in Old School, as I explain below.


The first time I saw the card Underworld Dreams was in 2003, when Mark Rosewater published on Wizards’ website an article about which cards he had selected for the 8th Edition core set to celebrate Magic’s 10th anniversary:

“While I was looking through Legends, I stumbled upon Underworld Dreams. I was around when the card was first restricted, so I remember the terror it used to be. But times have changed and cards like Timetwister and Wheel of Fortune were no longer staples in every deck. Maybe, I thought, Underworld Dreams could come back. No one would expect it. It would be quite cool.”

I was immediately inspired to go out and source myself a playset of four 8th Edition Underworld Dreams (later upgraded to Legends once I got into Old School) and put together a casual Vintage-legal Underworld Dreams combo deck. This deck marked a personal Magic milestone for me as in 2004 it inspired me to purchase my first ever piece of Power to go in the deck: a Mint condition Unlimited Timetwister for £125 (sadly sold again in 2006, for £124.90 of all prices).

Once a new Magic player I’m teaching has mastered the basic rules and is moving on to tactics, one of the first things I advise is to look at the board state and ask yourself “if no-one plays any more cards, who will win?” The answer to that question is the first step in working out whether you need to deal with the opponent’s threats ASAP, or whether you should be pressing for the win.


An Underworld Dreams played onto an otherwise stalemated board it puts the opponent on a clock. All of a sudden their priority becomes removing Underworld Dreams, or creating a faster clock. The pressure is on! Underworld Dreams might be a slower clock than Serra Angel or Serendib Efreet, but as we’ll see below it’s a more reliable one, and it’s a clock that you can speed up.


In addition, a cheeky side-effect of Underworld Dreams is that your opponent is now virtually checkmated on 1 life rather than 0, as once they get to 1 life only an Instant in their upkeep or draw step can stave off their doom – they won’t survive to their Main phase for a lethal Fireball, let alone their combat phase for an alpha strike.

The only frequently-played card in 93/94 that removes Underworld Dreams efficiently is Disenchant. Nevinyrral’s Disk takes out all your opponent’s stuff at the same time (and isn’t that widely played) and if they use their one Chaos Orb on one of your four Underworld Dreams, not only is something of a temporary fix but it means your other cards are safe from the Orb.


Chances are, your opponent doesn’t have many good sideboard options for Underworld Dreams. Most of the common sideboard options (Red/Blue Elemental Blasts, Gloom, Energy Flux etc) don’t pose any threat to Underworld Dreams. As long as your deck is built correctly with plenty of swamps (and maybe a little help from Dark Ritual) even things like Blood Moon shouldn’t spoil your party.

Your opponent’s sideboard is probably packed with answers…but not to Underworld Dreams!


Occasionally you may be lucky enough to have an opening hand with Dark Ritual, Underworld Dreams and Hypnotic Specter in hand. Although an un-answered Hyppie can be back-breaking, just remember how many answers there are to Hyppie compared to Underworld Dreams. A first turn Underworld Dreams can deliver a lot of damage in a slowish format like Old School and it can’t be bolted, plowed or bogged down by Maze of Ith.

Lots of other “inevitability” cards in Old School put your opponent on a clock, or give you an ever-increasing advantage, but also tie up your gameplay in the meantime. For example, Jayemdae Tome uses 4 mana per turn, Millstone 2 mana, Library of Alexandria forces you to keep hold of cards, etc. However, after the initial investment of BBB, Underworld Dreams lets you play whatever you like. Play your Juzams, Su Chi’s, The Abyss, Fireballs, etc. In the meantime Underworld Dreams grinds relentlessly on.

More than one mage was driven insane by losing to Underworld Dreams before they could mill you out.

Playing Timetwister or Wheel of Fortune with Underworld Dreams on the table is the icing on the cake. Not only do you get 7 new cards but you also deal 7 damage at the same time. Suddenly Braingeyser becomes not just “Draw X cards” but “Choose one – Draw X cards or Deal X damage”.


Finishing your opponent off with Braingeyser, Timetwister or even Ancestral Recall is not only amusingly satisfying, but it happens more often than you’d imagine. Just don’t forget that they draw ALL the cards first, then all the Underworld Dreams triggers go on the stack, then they have a chance to play any Instants they just drew before they die – be wary of a cheeky Lightning Bolt to kill you or Swords to Plowshares that gains them a bit of life and makes your Timetwister non-lethal.


Underworld Dreams is one of my favourite cards, and I hope you are inspired to crack out some swamps and give it a try. A nice part is that there is also no single “Underworld Dreams deck” - my current deck (photo below) is a midrange build splashing red and blue for Timetwister and Wheel of Fortune, but also full of chunky creatures like Juzam Djinn and Sengir Vampire.


You can go more aggro with Mono-Black (Black Knights, Drain Life), control with Deadguy Ale (StP, Icy Manipulator), or full combo as a Trick deck. My next project might be to try pairing it with The Abyss and artifact creatures. Keep us all posted with your own ideas and successes! 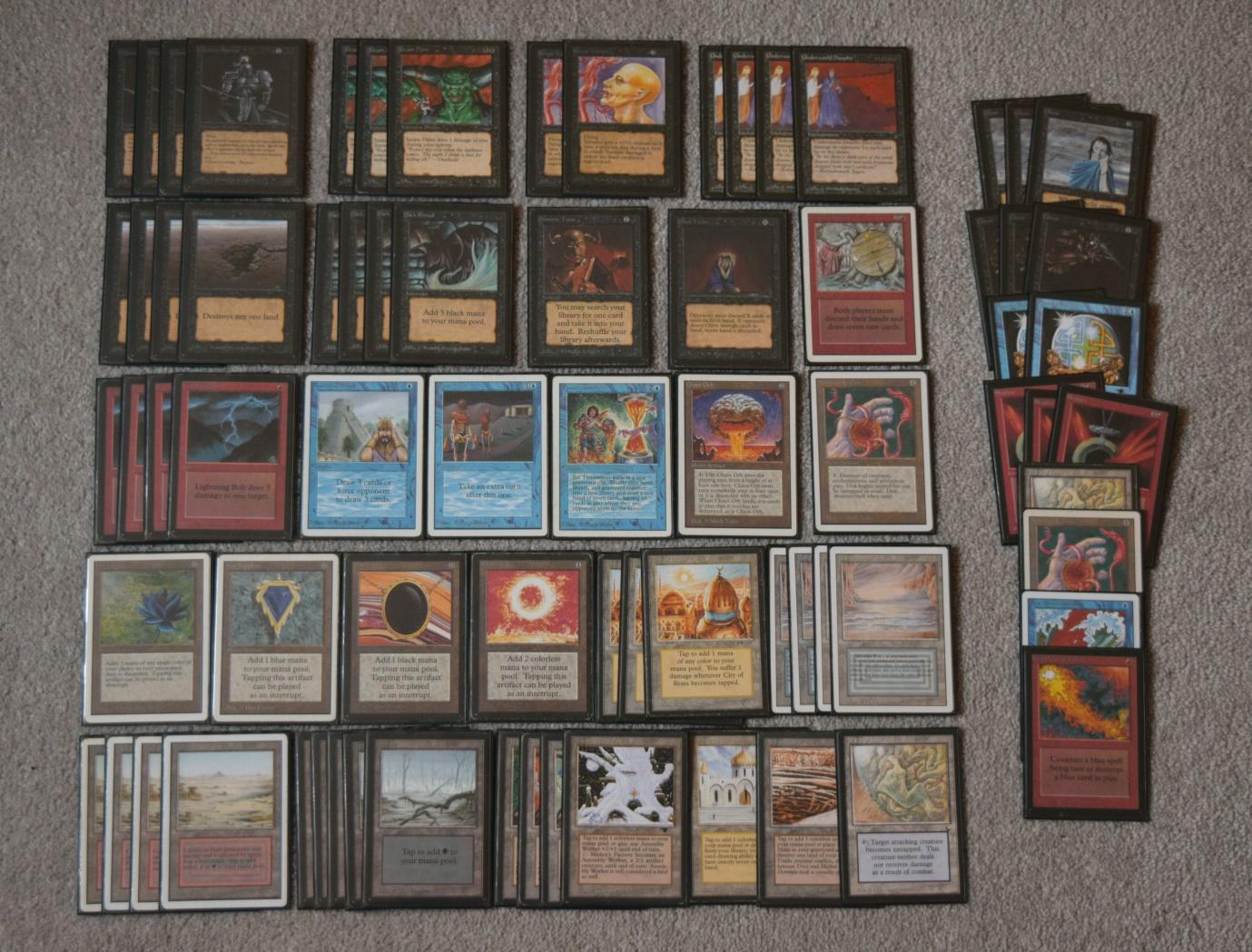 In your end step, Ancestral you for 3.  My turn?  Untap, draw, Timetwister you for 7.