In 1927 Samuel Ryder, a British seed merchant, emerged as the key donor behind the establishment of a bi-annual contest between two teams of golfers, one from the USA, the other from Great Britain and Ireland.  Going on to donate a gold cup for the competition, Ryder lends his name to one of the greatest events in global sport. The Ryder Cup is a contest famous for its contested rivalry as well as for the class of its competitors.  Most notably of all, at the 1969 cup the USA's Jack Nicklaus conceded the final putt of the competition to Tony Jacklin, tying the contest - one of the greatest acts of sportsmanship of all time.

Following a period of American domination, the Ryder Cup is now contested between teams representing the USA and Europe.

On Friday 30th 2018 two Old School communities, representing the USA and Great Britain and Ireland, will hark back to the founding of the Ryder, coming together to compete for The Ryder Cup of Old School.

The contest will be short but deadly, with the international teams duelling in Magic's oldest format: sudden-death Chaos Orb flips.  The winning team will carry the engraved trophy back to their homeland: 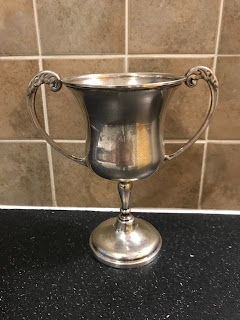 The Great Britain and Ireland team will feature a selection of founding members of London's Brothers Of Fire, while the US team will be centred on Chicago's Lords Of The Pit, with additional members drawn from across the fifty states. 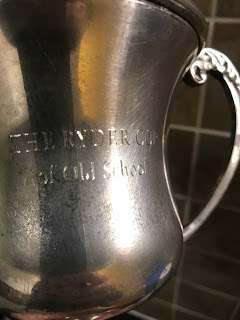 The tournament will take place during down-time at N00bcon in Gothenburg and will be presided over by an impartial international judge (yet to be found).
Posted by Jonas T at 7:01 pm 3 comments:

What does a time-travelling hipster, legislation protecting workers, and the US Navy have to do with Old School?  Read on to find out....

Spotting anachronisms is fun.  I know that others also enjoy it.  For example, yesterday I watched The Road To Perdition, a 2002 crime film starring Tom Hanks and Paul Newman, set in 1931.

Whenever I finish a film I've liked, I head straight to IMDB to read the associated Trivia and Goofs.  Am I the only one that does this?  To me, this is the perfect way to end the experience.

Sure enough, the Goofs section (where eagle-eyed viewers log mistakes such as continuity errors or film equipment being visible in-shot) contained numerous observations of anachronisms that only the most pedantic nit-picker could possibly see.  These included a sighting of a tobacco brand in a shop set in 1931 that wasn't released until 1932.

This much tells me I am not the only one who loves to observe something out of place.

But it isn't just about picking up on mistakes.  Sometimes something can feel anachronistic, and this sensation - sometimes subtle, sometimes jarring - provokes a response in us.  This can be akin to the 'breaking of the fourth wall'.  A Shakespeare play performed in contemporary dress combines outmoded speech and a modern setting in order to create a certain frisson.

And the spirit of the anachronism also exists in other areas.  Note the collar-and-blazer throwback styling of Roger Federer - a man who seems to evoke something of the Golden Age of tennis.  Or the British politician Jacob Rees-Mogg, a man who plays up to the image of an Edwardian dandy, thereby creating a sense of distinction from the focus-grouped normality of his colleagues.

Or we can consider fiction. Will Ferrell's character Buddy in the classic Christmas caper Elf, or Fry in Futurama, or Sylvester Stallone's John Spartan in Demolition Man.  In different ways, these men evoke the values of the past and use their embodiment of something out of place creates intrigue.


Federer, Rees-Mogg, Buddy, and Spartan all evoke the spirit of the man appearing anachronistically from the past.  But this can happen the other way too.  Note the case of the "time-travelling hipster" below.  If you're not familiar, take a good look at the photograph:

Although the idea of the bare-headed man with modern dress, modern sunglasses, and a compact camera appearing in 1941 has been debunked (full story here), pictures such as this carry a mystique because they are about a thing appearing where it shouldn't.

The human brain is trained to isolate differences because they present threats.  But anachronisms are a very special type of difference.

Okay Brother Jonas, so what does this have to do with Old School?

Well, I'm not about to argue that we who play this format - particularly those of us who, like me, play only this format - are somehow special because we are anachronisms.  Although I will say that the correct term for Savannahs and Tropical Islands is, and always will be, "multi-lands".  And secondly, language such as Bant and Grixis has no place in Old School.  If you must use a shortcut word to relate three colours, then there is no need to say 'Esper' when one can say 'Chromium'.

Leaving this personal hobby-horse aside, I'm interested in the world of Old School, and where anachronisms appear.  We are all used to Magic exhibiting many of the characteristics of a fairly standard fantasy time-period, with some augmentation by way of the Brothers' War.  But I've spotted three serious anachronisms in Old School and I'm on the hunt for more.  Because if Old School is a format could be argued to be an anachronism, then how cool is an anachronism within an anachronism?

Exhibit One: The Dominaria Health And Safety Code

If there are three things I love in Magic, it's colours doing stuff they aren't supposed to do (Psionic Blast, Fork, etc.), Goblins, and coin-flipping (I've even got my own coin-flipping deck with one of every flipping coin-flip card all the way up to Fallen Empires).  So unsurprisingly Goblin Artisans is one of my favourite cards of all time:

But - what about the headwear? 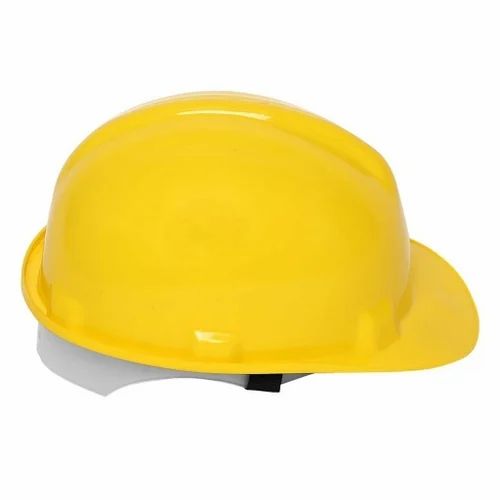 Extensive research (er, a quick read of Wikipedia) informs me that yellow hard hats of this fibreglass construction are intended for "general labourers and earth-moving operators" and were popularised in the 1950s.  Not only do these Goblins display headwear from the future, but they've also somehow imported a rather un-Goblin-like attachment to health and safety culture.  Now call me a pedant, but I don't recall the Goblin Digging Team having anything approaching a policy designed to anticipate "injury due to falling objects, impact with other objects, debris, rain, and electric shock".

I can't take the credit for this one because it was brought to my attention by David Chambers who visited us in London to display a rather fun artifact-recursion-o-geddon deck (like any truly original deck it defies categorisation - needless to say it was a thing of beauty).

While playing him, he put a few of these guys down and caused me to look at them as I had never done before: 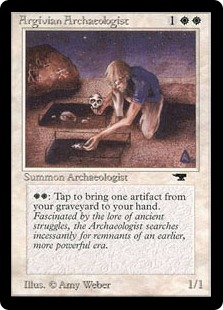 Okay, the glasses are fine - Urza has both glasses and rose-tinted sunglasses in Alpha.  But David's pet name for the fellow - "man in a t-shirt" - was the real Murder She Wrote moment.  A MAN IN A T-SHIRT.  This is the Antiquities equivalent of the time-travelling hipster.  Only without the debunking.

Okay, okay, you may not be sold on these two.  But what if I told you that a card had a definitive sighting of an unmistakably twentieth-century person?  Well, hold onto your anachro-pants. 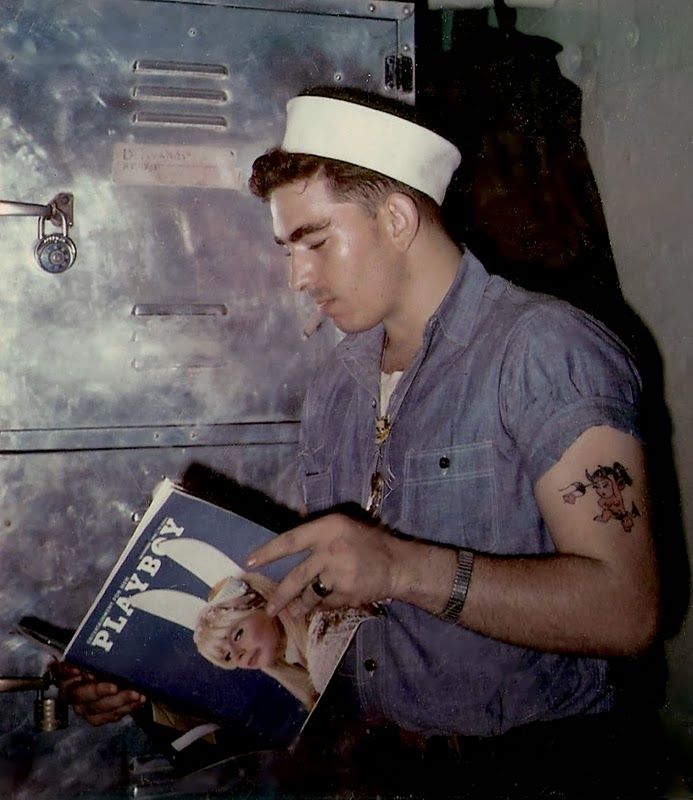 The US navy of the 1940s and 50s - home to Frank Sinatra with one night on shore leave, old-style tattoos, and the bravest freedom-fighting seamen since the age of Nelson.  A historical entity rich in both flavour and valour.

BUT ALSO the spiritual home of blue zombies with a penchant for black mana.  Ladies and gentlemen, I give you: Drowned. 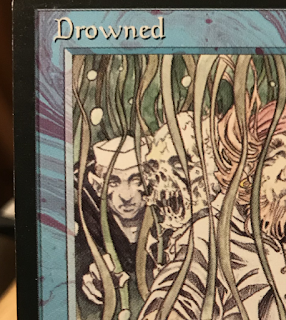 And there we have it - a 1940s US sailor unmistakably appearing in the world of Old School.  How he got there?  I'm betting some kind of misconfiguration of the Obelisk of Undoing.  It's just as well he left his ship behind or else the poor old Pirate Ship would be at risk of being seriously outgunned.  By my calculations it would take at least 3 Aladdin's Rings to put a hole in the side of the USS Nimitz.

So, thanks for reading this cantering through Old School lore.  And please let me know below if you find any anachronisms I missed.  We might have enough for a theme deck.
Posted by Jonas T at 9:02 pm 3 comments: