A Brothers Of Fire delegation will be attending GP Birmingham to participate in the Old School event which is being organised there on SUNDAY 13th from midday.  More details on the UK Old School Magic Facebook group.

Current indications are that this event will follow Channel Fireball's Old School rules, which means mana burn will be in effect - and Fallen Empires will be legal.

Personally I'm a fan of mana burn being part of the rules in Old School.  Firstly, whatever its faults, it is a part of the original game's heritage and flavour.  Secondly, getting rid of the rule means that some cards like Su-Chi and Mana Drain (and even Black Lotus) don't have a balancing drawback which was clearly intended when they were released.

I'm assuming the Vancouver mulligan (scry mulligan) will not be in effect.  On this I'm with the innovators rather than the traditionalists, as it balances out bad luck on the draw.

This feeling - of half-welcoming the modern age, and half wanting to escape it - seems to be at the heart of Old School, and the philosophy and appeal behind it.  I prefer to look at the format as Magic's most 'perfected' form - a quest to isolate the form of one of the greatest games ever, rather than purely enjoy it as a throwback attraction trading exclusively on the past.

Whatever your thoughts on the matter, it should be a great day.
Posted by Jonas T at 9:52 am No comments:

1st July 2017 and time for Brothers Of Fire to reconvene an assortment of old and new Old School faces at our familiar home of Mirth, Marvel, and Maud in North-East London.  This would be our third COPcon, with players competing for two prizes. Firstly, the traditional signed Circle of Protection - this time, in black.  Secondly, a Brothers Of Fire awarded to the player representing the spirit of Old School with the most original deck, outlandish play, or sportsmanlike gesture. 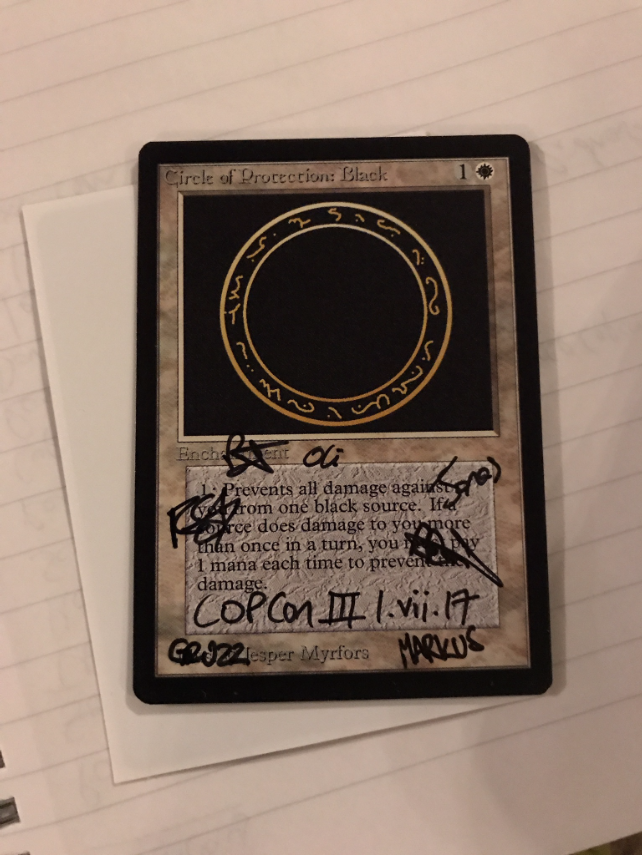 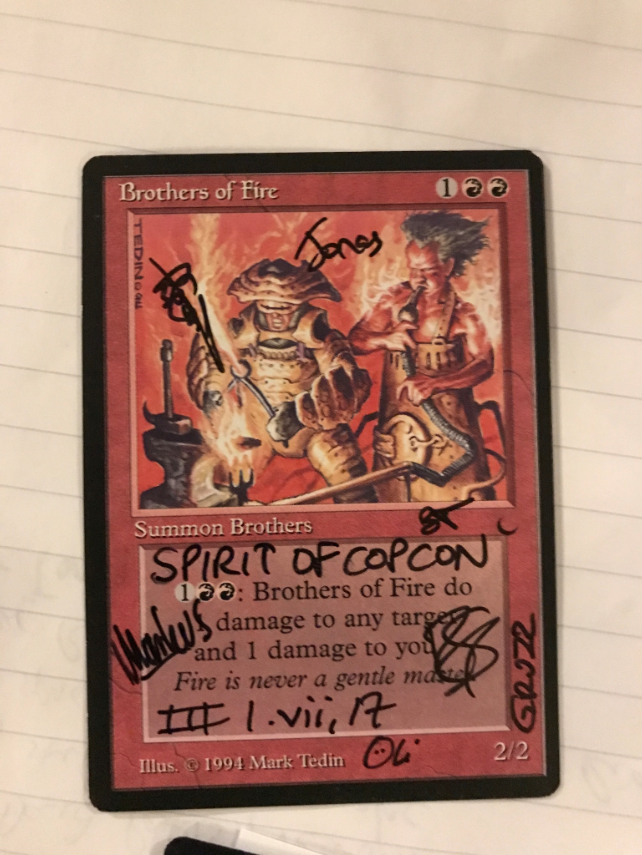 This would be our first event since the unrestriction of Black Vice and Maze of Ith - changes which have been favourably received in the community.  With seven attendees (Ben, Markus, Oli, Richard S, and myself from previous iterations - and two new faces in the form of Ross and Graeme), we had the perfect number for round-robin against a fairly relaxed clock which allowed plenty of opportunities for trips to the bar. It wouldn't be London Old School without a few relaxed ales.

I was playing a further-tweaked ‘post-Goblin’ red - shooting for burny early kills and inflated creature damage, supported by key disruptive cards in the core to unsettle my opponents’ strategies.  Having previously been cooling in my attitudes towards it, today Fork re-established itself in my mind as one of the best cards in Old School red.

My first match-up was against Graeme, a veteran of the Gravesend Magic scene and relatively new to the format.  His deck was a work of art with some tasty black-bordered goodies, all fresh from the loft.  It’s great to see classic cardboard resurrected and getting playtime again.  Given that my deck is capable of some pretty explosive starts, his own kick-off to game one really put me in my place: a turn-three channel fireball, powered by a Lotus and a Mana Flare.  Crucially, the Lotus meant he only had to descend as low as four life - making my in-hand Bolt a useless gesture.

I hoped for better luck next game.  When the Mana Flare hit the table I was ready with two Forks in hand: the first copying a six-point Disintegrate, the second duplicating a Drain Power. 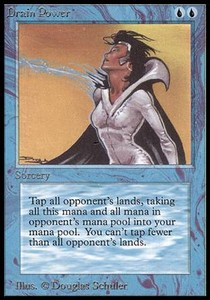 With two Drain Powers resolving in sequence - mine first - this led to an interesting situation.  We consulted Gatherer to confirm that the ‘drained’ player could choose which kind of mana to draw from their dual lands.  Crucially this enabled my opponent to tap his Taigas for green - so although I was able to pump his red mana into my Goblin Balloon Brigade, I was unable to squander the green, which then drained back to him and allowed him to forge ahead with his schemes, supported by his native artifact mana.  Despite reducing him to one life in both games, I was beaten 2-0.

My next match-up against seasoned contender Markus went better.  After Chaos Orbing his much-loved Juzám Djinn off the table, he was forced into a Timetwister.  When I followed up with a Wheel of Fortune, I was able to dig easily into my burn.

Game two Markus put down another of his fast Juzáms but I responded with an outrageously lucky top-decking of my City In A Bottle, and then followed up with multiple Ball Lightnings for the kill.  This was my first ever match win against Markus! I expect revenge next time, half for the win, half for the violence I inflicted on his Djinns.

At 1-1 I faced a friend I have known since I was five, but I expected and received no quarter.  Oli is the master of the white weenie and his first-strikers pre-empted any hope of forcing a Ball Lightning through.  In the first game I was beaten down by two Serra Angels. In the second, a critical mass of Thunder Spirits meant I went down 2-0 in games, and was now running 1-2 in matches.

Next up was my brother Ben, the birthday boy, who is running 4-0 and needs some stiff opposition.  Sadly, my deck fails to provide it.  Game 1 he gets down an early Ivory Tower - a card that I reflect we are going to see more of after the end of the day’s play, given its Vice-nullifying properties.  In game 2 I manage to get him down to 3 life before he stabilises and takes the win. This feels like revenge for my win at COPcon II.

At 1-4 I am entering the territory of needing to salvage my record. My opponent, Ross, is a COPcon newcomer but Magic veteran. Unfortunately on his first game he risks a bad keep on the draw, and is rapidly destroyed by a Black Vice. On game 2 I get another early Vice down and topdeck a Chaos Orb to clear the way for multiple-Goblin beatdown and a Bolt to the head.

By the time of the last round of round robin, it was safe to say that the spirit of Old School was flowing in our veins, supported by copious pints of the Raspberry Wheat Beer on offer at Mirth.

My final matchup of the day’s competitive play is against COPcon's black-border purist resident Richard S, who has moved away from The Deck for this event, and is playing a gorgeous fully black-bordered UBR Guardian Beast synergy deck. Thankfully we enjoy three superb games.

The first game is something of a classic as I kick off with a Mox and TWO Vices (see below).  He eventually stabilises on 1 life and holds me at 20 until he Transmute Artifacts my most hated card (after Mind Twist): Mirror Universe.  Just when it seems he is about to effect a 19-point swing I trust to luck and top-deck the bolt!  Justice is done. 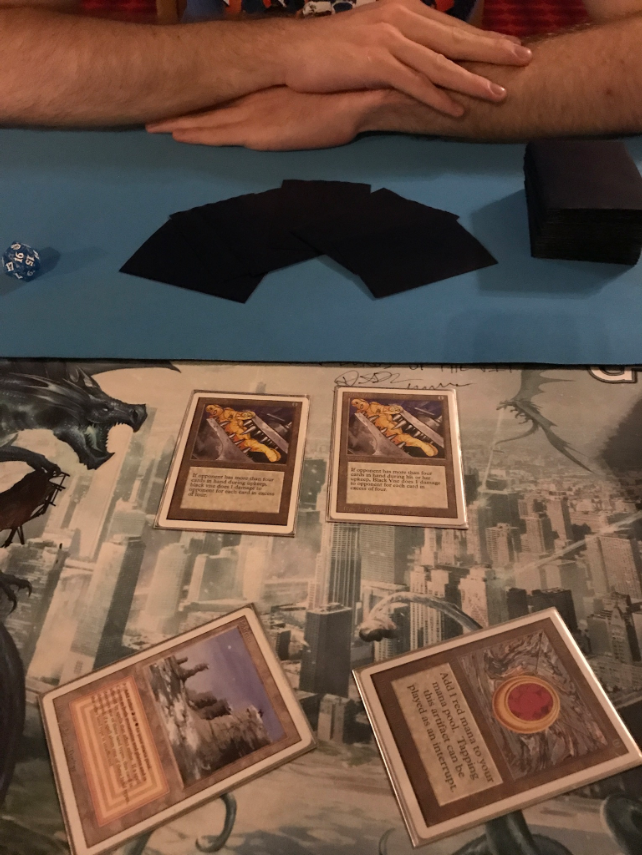 Game two I swing in with Ball Lightnings and take Richard to 1 life again before (you guessed it) a second Mirror.  This time it earns him the win as the only thing I can top-deck is another Black Vice.

In game three, Richard’s Ivory Tower adds precious life before I Disenchant it.  He hits back with fast Mana Vaults but once tapped, he is running Atog-less and unable to get them off the table.  Once again I take him down to one life before he re-asserts control and our old friend Sol’kanar the Swamp King storms through for the win.  I can’t argue with such a tight match being finished by a card of such rich flavour. It does make one wonder why the Legends playtesters didn't do a better job of costing the other Legends in that set.

All but one of the games is complete, so the final game is something of an exhibition match. Ben is facing up to Richard, but with an unbeaten record, he is already champion. He duly defeats his opponent to win COPcon III and take the COP. On his birthday he has managed to go undefeated in matches, and drop only two games all day. No mean feat.

Celebrations and some light trading continue for some time, before a hard core of attendees proceed to local nightspot the Victoria for a pool comp (in which Ben's team is also victorious - he was on a roll that day).

COPcon IV will be taking place on 21st October 2017! Put the date in your diaries. All are welcome.

A note from our winner:

No full report from me this time, for good reason. I started the day with a pint of 6% raspberry wheat beer at 1pm and followed up with one or two more for each of the 6 rounds. One pint even arrived with candles attached – thanks guys!  After the event we even had a pub crawl/ shots/ kebabs until about 2am. I was on autopilot after a while but my deck seemed to have all the right answers at the right times. For example Markus opened Library, Lotus, Juzám. I sheepishly played Mox, City In A Bottle. Ouch!

Great variety of decks and good interactive games with sound, relaxed guys. A superb day. My MVP was Ivory Tower, which saved my bacon many times. Serendib Djinn over-performed too, defeating Graeme’s gorgeous beta Shivan Dragon. Thanks to Joey for organising another great event; looking forward to the next one.


Some highlights from across the matches: 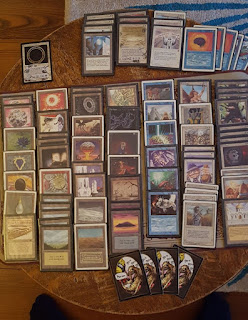 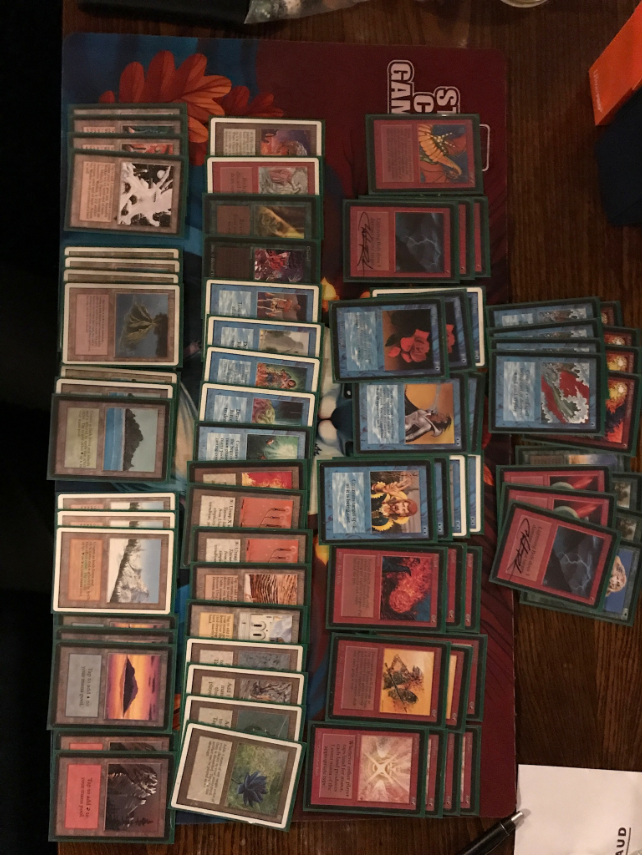 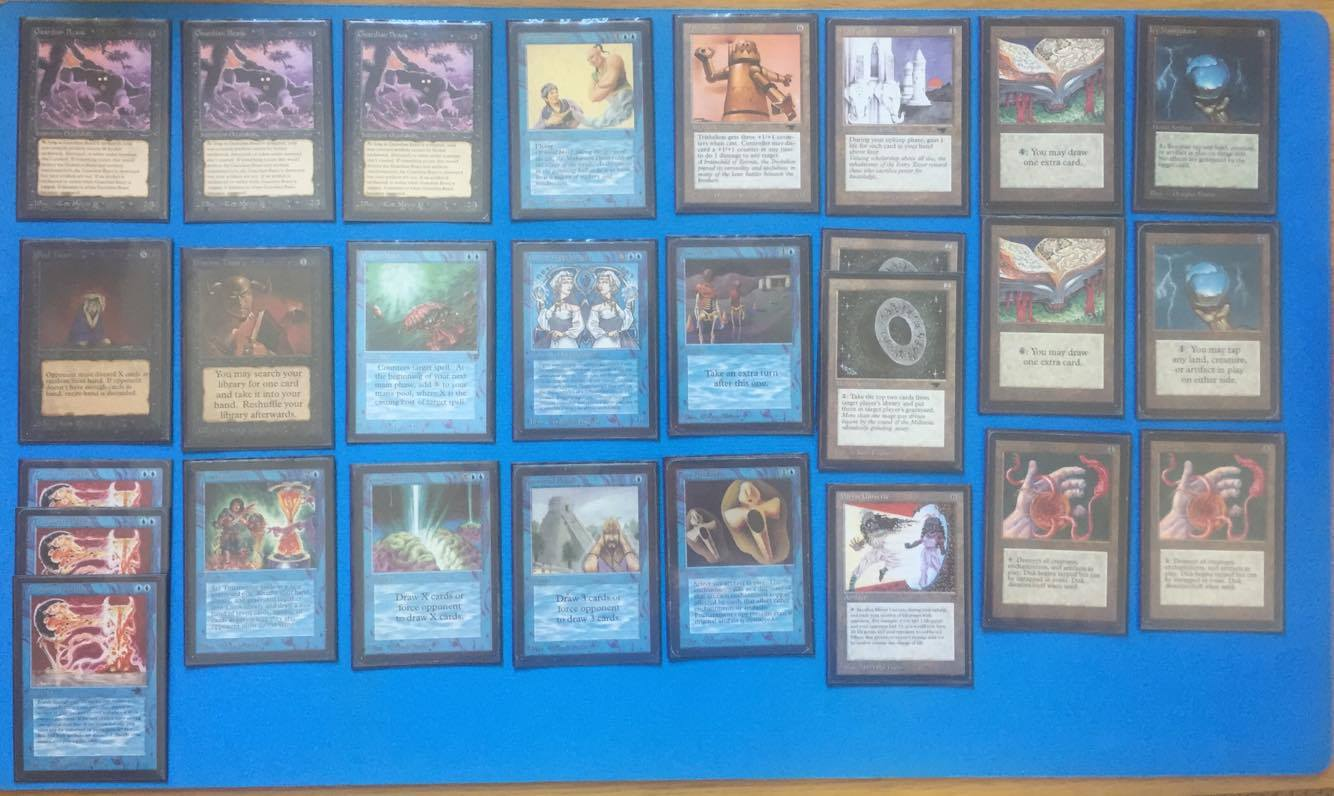 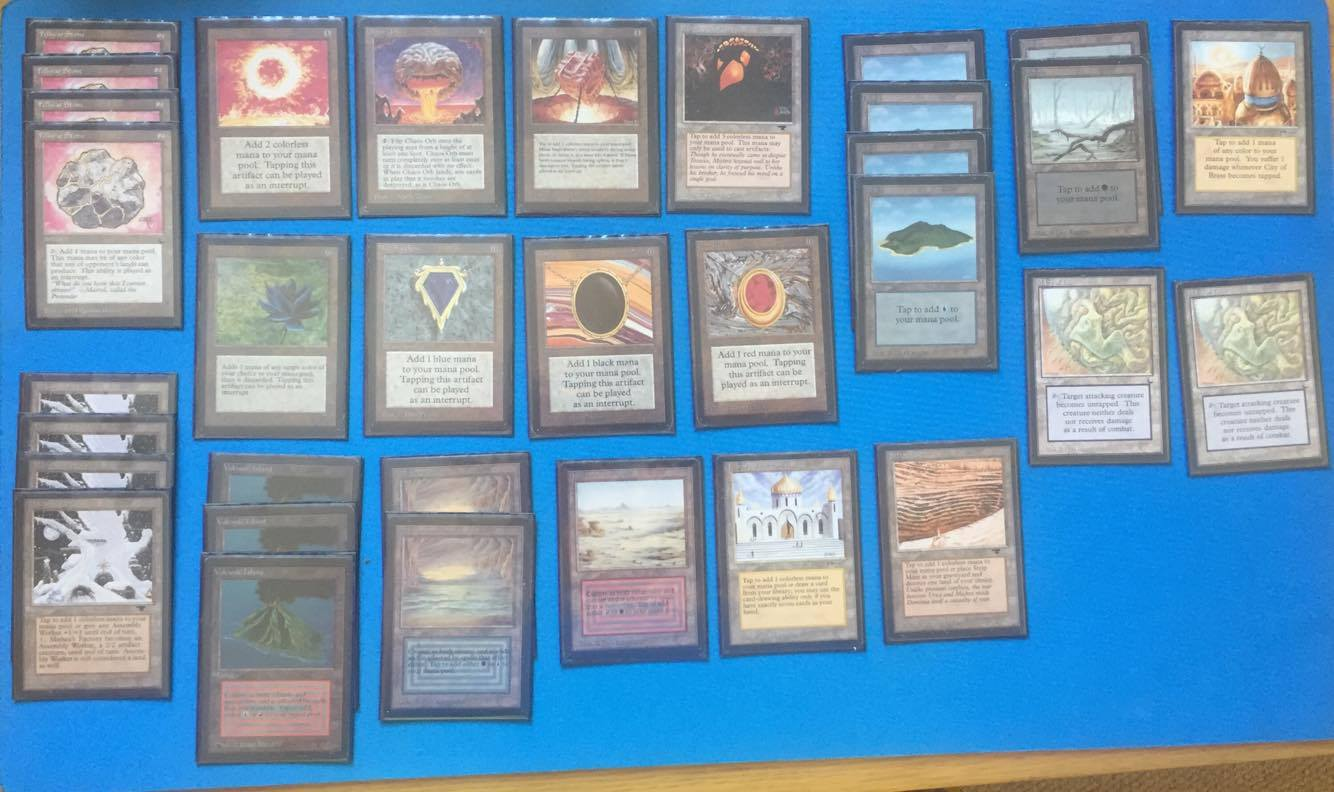 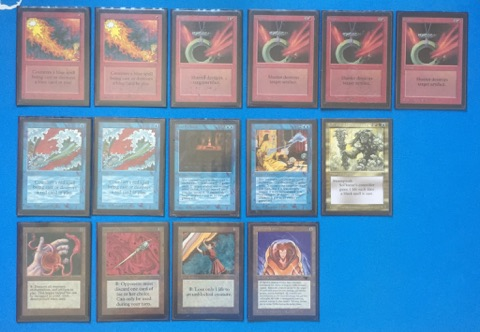 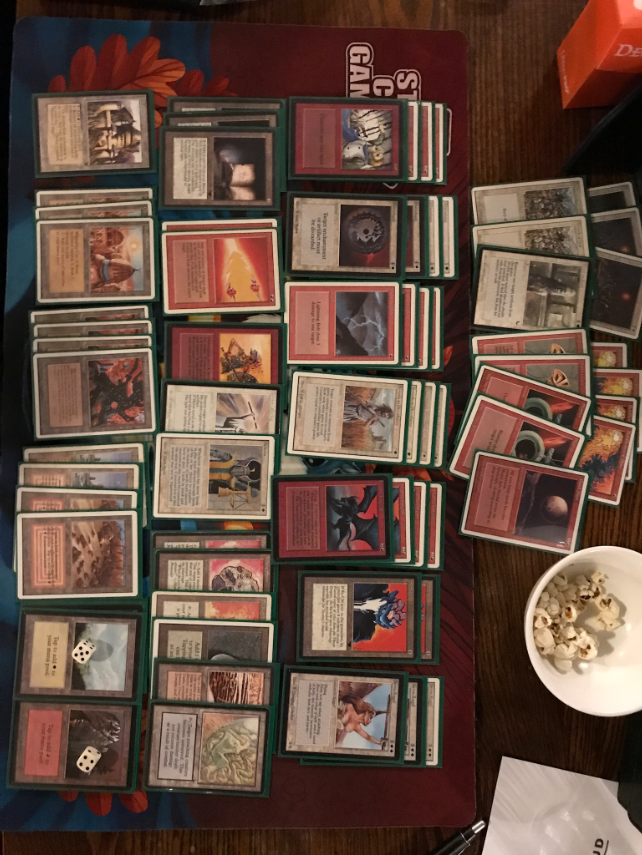 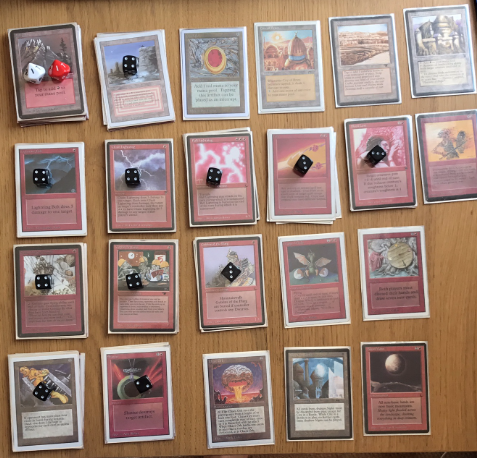