Old School's representation at GP Birmingham comes about through some good initiative from the community, most notably Jim Brophy.  First they arrange an informal side event to take place, and then successfully arrange to have it included in Channel Fireball's main programme.  Hats off to the proactivity guys!

The Old School is scheduled to take place on Sunday, but we attend the day before in order to check out the rest of the Grand Prix.  The Brothers Of Fire delegation gathers early on Saturday at Euston station to receive its first piece of bad news: 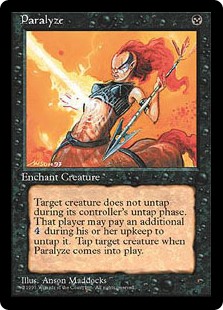 Brother Ben has been laid up in bed with a serious back injury.  We know it must be serious as normally NOTHING keeps Ben from his Old School.  Fortunately we meet Markus at the train station who is hastily enlisted as the fourth member of our delegation.

After a brief pitstop to refuel Jandor's Saddlebags, we head to the train, only to encounter a new setback in the form of the Old Man of the Sea, who takes considerable pressure to vacate our booked table seats and allow us to play Old School en route.  Eventually he quits playing dumb and moves opposite to leave us unmolested: 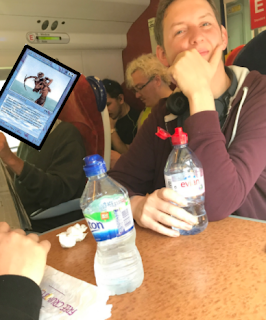 This done, we can get on with the matter at hand.  Markus makes an early claim for Loon Play Of The Weekend with the most crazy proxy I can remember seeing: 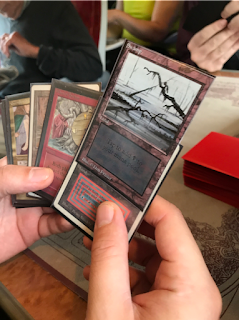 
After some brutal train-based beatdowns are delivered by Oli's black practice deck, the team reaches Birmingham: 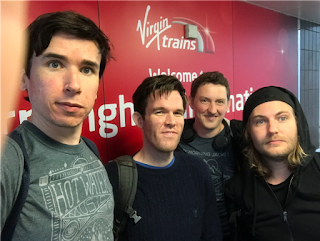 We reach the venue and it's fair to say the scale of the event makes COPcon look like a handful of guys in a pub by comparison: 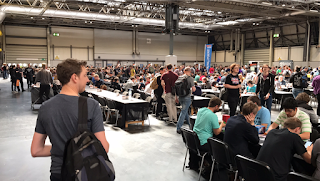 After checking out the trade stands and making a few Old School purchases, we split up.  Some of us opt to play Legacy (hiss), while Oli and I enter the 'throwback' event to play an Invasion Block Sealed.  Given that we had both long retired from the Standard game by the time it was released, the nostalgia factor of this event is rather lost on us. 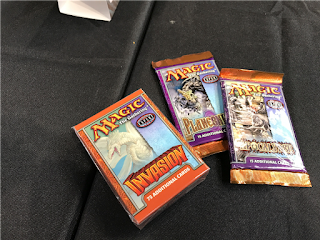 As we open the packs I am relieved to see that at least we are playing with cards in the 'old frame', but can't help but wince when a neighbour declares "This is real old school magic!".

During the event I try to drum up interest in tomorrow's Old School, but with little success.  One opponent tells me that she couldn't afford to play.  I try to convince her otherwise, but the huge price spikes in key staples which take place a couple of weeks after the event will have done nothing to alter her impression of the elitism, rather than the inclusivity, of the format.

Despite our total unfamiliarity with the cards in question, Oli and I respectively turn in at 2-2 and 3-1, picking up 120 tokens.  These feel quite worthless on a trade wall featuring a single old-frame card - All Hallows' Eve.  Apparently the dual lands were snapped up on the Friday.  Nevertheless, this event makes a pleasant amuse bouche for tomorrow's Old School.

We undertake some additional trading.  As I vainly seek to continue my buyout of the global supply of black-bordered Brothers Of Fire (stay tuned for the spike, everyone), Stebbo has rather more premium transactions to carry out: 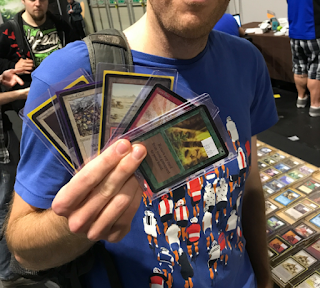 This done, we head into Birmingham City Centre in search of a Balti.  We know we've found the right place when we enter a pub-cum-curry-house serving a very Old School beer, which might only be improved with an Anson Maddocks illustration on the badge: 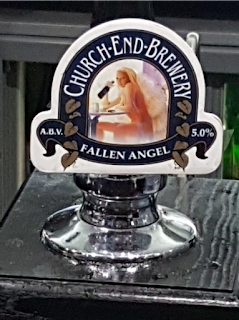 Refreshed by pints, we pause only for Stebbo to knock a full flagon of Fallen Angel straight into my lap, meaning I can enjoy my Burnt Offering of an incredible tandoori selection with added squelchiness: 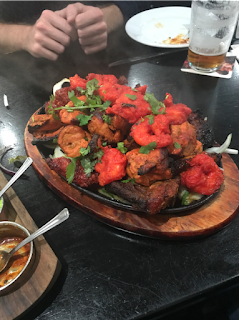 After frequenting a number of additional alehouses we return to the hotel, only to discover a breakfast policy that rides roughshod over Stebbo's "black border or not interested" card-acquisition philosophy. 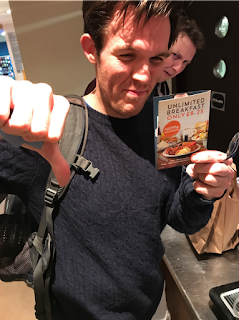 The next day, we wake relatively refreshed and head back to the NEC.  With a field of 23 entrants, we may be a tiny contingent compared with the fireworks of the main event, but we represent a good-sized field.  It's regrettable that the Revised sealed event clashes with our own, as many of us would have fancied cracking some of that product, but nevertheless - we made it.

One of the entrants (I believe Bryan) has very kindly put together a participation card to mark the event.  Before long these are covered in signatures. 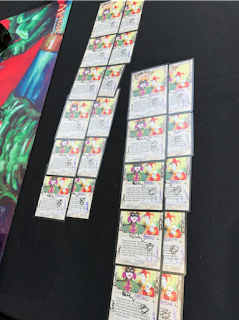 Given the Channel Fireball B&R list, I'm playing a variant of my post-Goblin deck with fearsome Goblin Grenades boosting my burn: 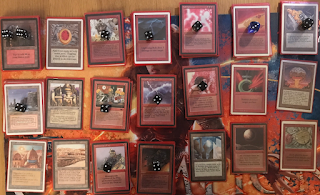 Owing to the loss of my notebook, my recollections of my games are somewhat limited.  My first match-up is pure Spirit of Old School - it's my opponent's first competitive meeting and his blue weenie deck, including such classics as Merfolk Assassin and War Barge, is a true delight of nostalgia.  My burn rolls straight through in game one, before crafty Phantasmal Terrains cut off my red mana in game two.  Fortunately I take the third despite some pesky Force Spikes.  It's been a fun start to the event and in the coming days I am pleased to learn on Facebook that my opponent has caught the Old School bug.

Next up I face Bryan - it's nice to put a name to a face after reading many of his online contributions.  His UGb zoo plays some beautiful synergies.  In game one I manage to unleash a Forked Goblin Grenade.  It's hard for anyone to come back from 10 points to the face and he scoops.  However, he exerts total dominance in our following two games, picking me apart with a looped Time Walk in game two, and building up three pumped Whirling Dervishes in the third. 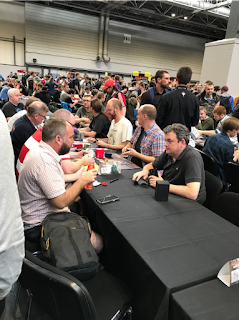 My third opponent has travelled all the way from Belgium and we enjoy a good-spirited game.  However, he has horrific mana problems in the latter two, compounded by fortunate Chaos Orbings and a Strip Mine from me.  No-one likes to win like this, but sadly that's how it works out sometimes, and a lesson against the risky keep.

Although the Channel Fireball event officially concludes after four rounds, it's been informally agreed that the top four will play on to find a champion.  At 2-1 I take a seat at table number two to decide whether I will be among them.  My opponent from Spain is sporting a Team Juzam t-shirt and unsurprisingly is playing mono-black.  I anticipate heavy hand destruction and aim to lay my cards on the table as soon as possible.  Taking the first game with some fortunate Ball Lightnings coming past his defences, on game two all I can do is Fork his devilry (copying both a Hymn, and - even better - a large Mind Twist) as I am picked apart by Factories.  In game three I make a key unforced error pushing for the win, opting to send my Chain Lightnings to his dome rather than the Black Knights he has assembled, and my opponent goes on to be a deserved winner.

My fellow Brothers of Fire have also run out at 2-2 - including some blue-on-blue action as Oli faces Stebbo and is duly "four-booked" by his team-mate: 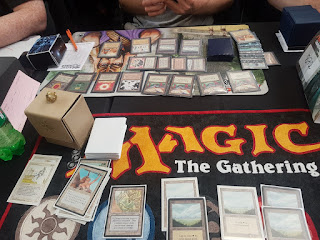 As a result, none of the four of us makes the elimination round - although a personal placing of ninth out of 23 feels reasonable enough.  Jason Savage goes on to win the event with a fierce-looking UR Counterburn deck.

For us, though, this is the end of the Old School.  We catch up with a few of the attendees and then seek out the other essential component of the format: BEER.

We pool our prize tokens and take away a box of Kaladesh for a draft - although obviously the new borders don't sit well with us...

After some relaxed beers in the Wetherspoons, all that remains is the essential step of more Magic.  As Oli and I crack the box of Kaladesh, pausing every twenty seconds to remark at how overpowered the creatures are, Markus and Stebbo admirably try to complete play in rather a confined space.  It doesn't help that Richard is playing The Deck. 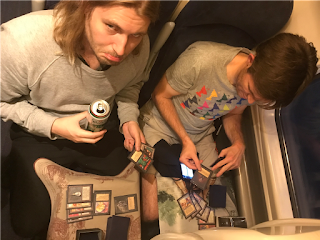 Mind-twisting a Juzam - not cool

Eventually we make it back to London and can look back on an epic weekend.  Thanks to those who made it possible.

REMINDER: COPcon IV takes place on 21st October.  We may not quite get 23 players, but all are very welcome indeed.  Event on Facebook here.