In the glorious sunshine of the Urborg Feast outdoor tournament in Gothenburg this April this year I had the pleasure of doing something I’d never done before – judging at an Old School tournament.
This was, I admit, not an onerous exercise – I think between us the three judges only had ten judge calls all day.  However, the recurring themes about what was asked – and questions I’ve seen from other puzzled mages posting on the internet – guided me into thinking that it would be helpful to set out some tips about the Old School cards and rules that cause the most confusion.
I hope that you will be able to use this article in two ways:


Just one warning: the rules of Magic change from time to time – these rulings are all correct as of May 2019 and apply if you’re playing Old School using the current Magic rules.  If you’re playing Alpha 40 using the original Alpha rules, or playing some other local variation, then of course these answers may not all hold true. I have deliberately used some old school terminology  because I find that phrases such as “fizzle,” “summoning sickness” and “removed from the game” are not only more evocative but clearer – but that’s just description: the outcomes are those produced by the current Rules.
Finally, huge thanks to Dave Firth Bard and Chris Cooper for their proofreading and valuable suggestions and additions.
The Abyss
Q1: Can I regenerate my Sedge Troll to save it from The Abyss?
No – The Abyss says on it that creatures it targets can’t be regenerated!  (You can pay one black mana if you really want to use the regeneration ability, but the Troll will still die.)
Q2: Can The Abyss destroy a White Knight, bearing in mind it has Protection from Black?
No it can’t – The Abyss requires a target, and a black card can’t target something with Protection from Black.  Another target must be chosen, if possible.
Banding
Banding boils down to two things:
For some attacking examples let’s imagine as an example that you choose to form a band consisting of two creatures: Mesa Pegasus (1/1 flying banding) and War Mammoth (3/3 trample), and then attack. 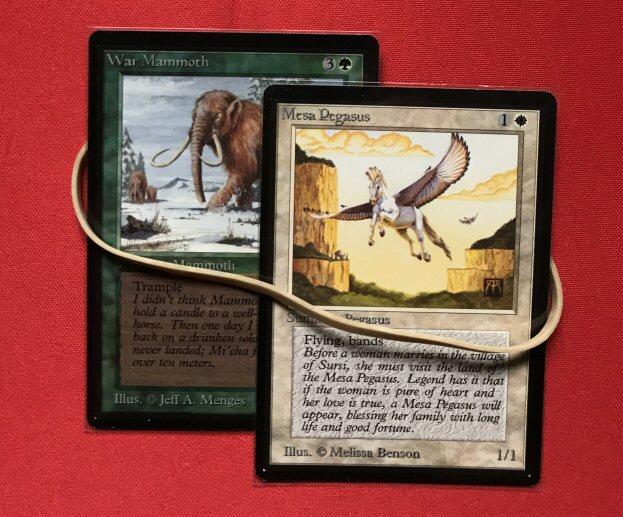 Q1: Can a creature without flying block my band?
Yes.  The mammoth doesn’t have flying, and if your opponent blocks it (say, with a 5/4 Water Elemental) the whole band is then blocked due to point (a) above.
Q2: If he does block like that, can I choose all 5 damage of the Water Elemental’s damage to be dealt to the Pegasus?
Yes.  Point (b) above means you get to assign the damage, and can assign all 5 to Mesa Pegasus even though that’s more than enough to kill it.  The Water Elemental will take 4 damage and die, so you’ll end up trading a Pegasus for the Elemental, and the War Mammoth will survive (you could also choose the Mammoth to take the 5 damage if you preferred the Pegasus to survive).
Q3: What happens if I block a creature with Trample using a creature with Banding?
Let’s say a Force of Nature (8/8 trample) is attacking, and you block with your Mesa Pegasus and War Mammoth.  Normally your opponent would choose to deal 1 damage to the Pegasus, 3 to the Mammoth, and 4 trample damage to you.  But with banding YOU get to choose how damage is done. So you can choose to assign all 8 damage to the Mesa Pegasus (or the Mammoth).  If you do, none will trample over to you or kill your other creature. Even if you chump block with just the Mesa Pegasus you can still choose for it to take all 8 damage, with none trampling over.
Blood Moon
Q1: My opponent plays Blood Moon and in response I activate my Mishra’s Factory to make it a 2/2 creature.  What is it once Blood Moon resolves?
Until the end of the turn it’s a mountain that’s also a 2/2 artifact creature. Note that it will no longer have its other abilities, including the ability to give an assembly worker +1/+1.   From the next turn onwards it becomes simply a mountain, and no longer a creature.
Q2: My opponent has both Blood Moon and Library of Alexandria in play.  I play City in a Bottle. Does my opponent have to sacrifice her Library?
Yes.  Although it’s now a mountain, its NAME is still “Library of Alexandria”, and because Library of Alexandria was first printed in Arabian Nights it has to be sacrificed. 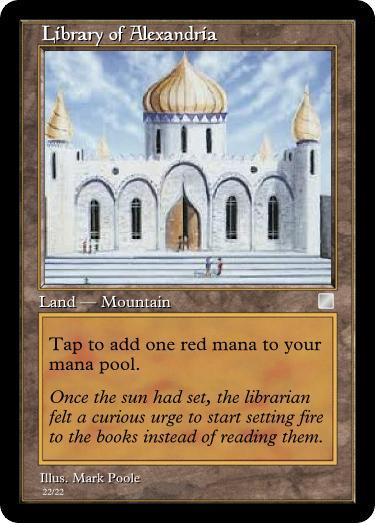 Chains of Mephistopheles
The effect of this card is best visualised as a flow chart, such as this one created by the user “silvercut” on mtgsalvation: 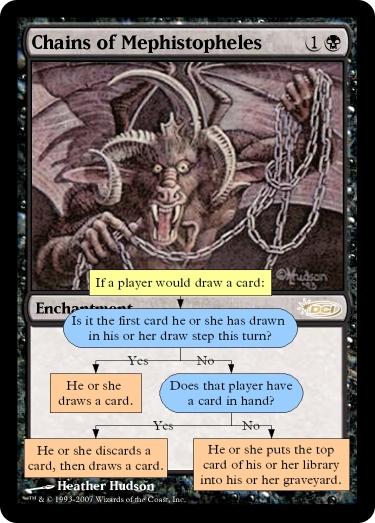 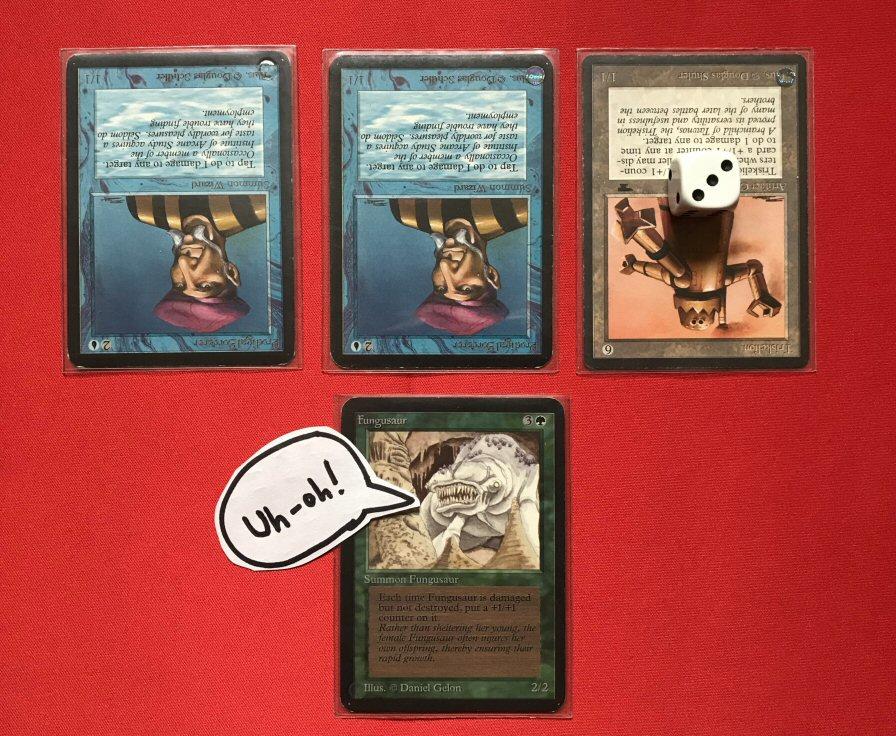