Happy 2019 everyone! With all the talk of new beginnings, there's also time for some retrospective reflection.  I had a busy few months to close out last year, so for those of you who are interested, here's a largely pictorial canter through it.

While our American cousins across the pond had Eternal Weekend and LobsterCon to look forward to, the marquee event in Europe is undoubtedly Fishliver Oil.  I made a late decision to go, joining a UK delegation of Brother Ben and Karl, and Brian. 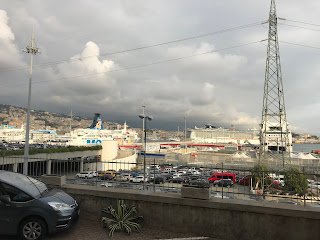 Upon arrival at Genoa, we headed straight for the hotel which was the main base for the event.  The proprietors seemed to really understand that this was a 93/94 event, laying on decor and service standards straight out of the early 90s! 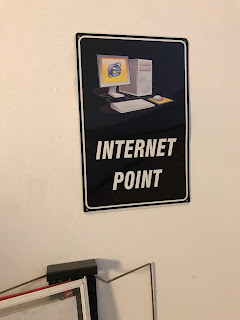 We weren't here for this piece of architecture - the real gem was the venue for the day one event, the Columbus Trophy, played with Eternal Central (i.e. American) card legalities.  And the biggest draw of all - it was played in the ancient lighthouse: 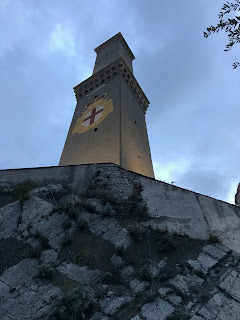 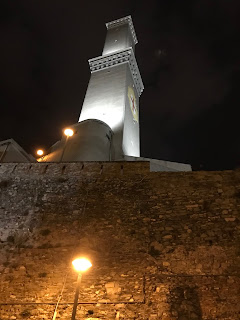 Mustering before the event was one of the highlights of the trip as people mingled and I was reunited with friends from across the world of Old School, including Danny and James all the way over from the US, Svante, and many others.  The hosts laid on sumptuous ciabatta and local wine, and after a brief false start, we got stuck in.

Having already qualified for N00bcon, I had a relaxed brew planned for the day after (the main event) and intended to push hard in this one.  My choice was UR powered Goblins.

The deck pic has been mislaid, but to cut a long story short, after an early win against Michel from Sweden (one of my favourite guys to play - always bringing amazing spirit and banter to our matches) I was absolutely buried by two very fast black decks playing multiple Hymn to Tourachs.  I was only packing two Psychic Purges in the sideboard (I should have had two main-deck and two in the board), and although I fired a few of them off, I was on the lower tables before too long. 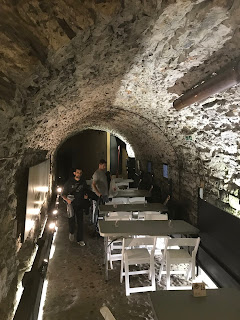 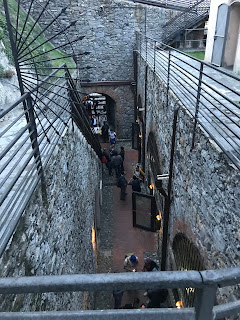 Not a bad venue for a tournament!

This didn't bother me too much as the atmosphere down in 'the engine room' was high-spirited and a chance for some fun convivial games.  Picture, if you will, the guts of the Titanic packed with poorly-perfoming but happy Irish folk dancing, while above decks the real players had to fret about sideboarding.  Down at the lower end of the tournament I also enjoyed a fun game against Andrea, who was bravely running a Power Surge deck - but who hadn't counted on the near-omnipresence of Factories undoing the card's utility. 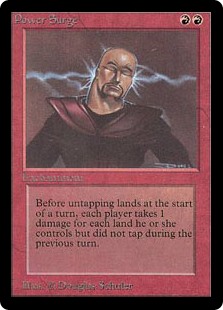 The UR Goblins brew definitely needs some work, in particular calculating the correct number of Psionic Blasts.

The last round of the tournament took place back at Hotel 93/94 and with that done I was able to push on to the real highlights which was getting to hang out with everyone.  In particular, I had the privilege of meeting Bjorn Johnnie for the first time and playing some drunken games which I remember mainly for both of us laughing the entire way through.  Good stuff.

The next day was the main event.  For the British delegation, we continued our tradition of our own national prize: 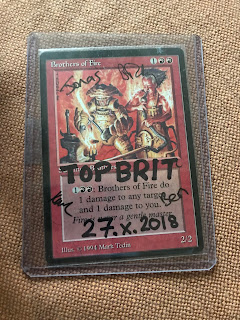 I wanted to play something fun that would give me plenty of variation through the day, so I opted to brush off a tuned version of my deck 'Parfaitog': 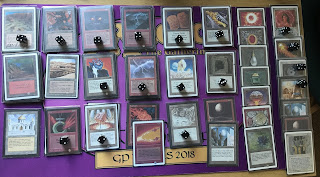 What's fun about it is the number of synergies you can exploit.  Copper Tablet remains an under-appreciated card especially when you can establish a life advantage and then hide behind a Winter Orb.  And making gigantic Atogs simply never loses its appeal for me, even though the real value he poses is more in his bark - the potential that he might go off - than his bite.  But, speaking of bite, check out this 17/18 monster I unleashed against Alise: 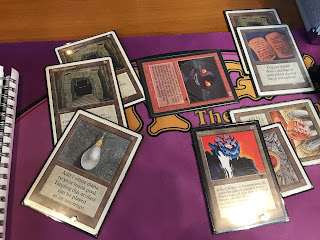 I had an unusual start to the tournament - despite playing fairly fast I drew my first match, and then went to the final five turns of the second.  I was undone here by my opponent doing a fairly dubious Chaos Orb at a crucial juncture and differing with my view on what constitutes one foot!  This, along with the unwelcome experience of being surrounded by people talking to my opponent in a foreign language, left me with a bit of the unwelcome feelbads.  This was only to worsen when my next opponent failed to show up (a feature that was to befall a number of other people throughout the day).  Without wanting to labour the point, I consider dropping from an Old School tournament bad enough, but just walking out without regard for others is not really acceptable. 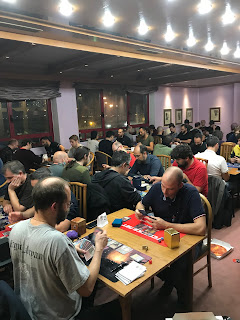 The event today had a more serious feel - the Italians are known as tight players and I respect that every culture is different - and that everyone has the right to approach the game in the own way.  Nevertheless, the atmosphere down at the bottom end of the tables still felt quite competitive and was rather less fun than the day before.  Fortunately I had another matchup with Michel (in which he avenged yesterday's defeat) which added some positive vibes to the afternoon.

Before long, it was over and again there was time for fun games.  Brother Ben and I took on a transatlantic 4-player challenge with Charlie H and Danny, all for the prize of the first pick from Ben's minty Fallen Empires booster.  With the stakes so drastically reduced, my deck seemed to come into its own and I beat all-comers, taking the prize: 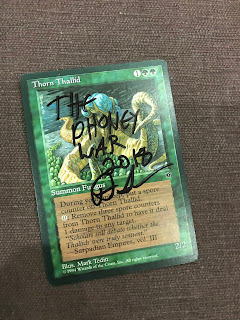 This competition only raises the stakes further - if that were possible - for this easter's upcoming Ryder Cup of Old School!  Danny and I will be returning as national captains.

I then took the time to add to my burgeoning collection of back-patch photos.  It's great to see this really taking root in many clubs across Europe: 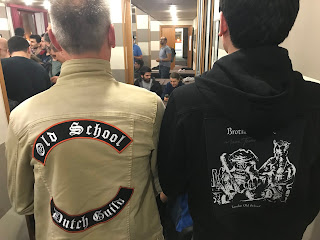 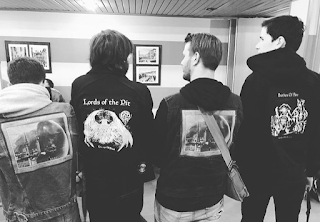 After a brief spell in Gordon Andersson's commentary booth, we gathered to watch the final. 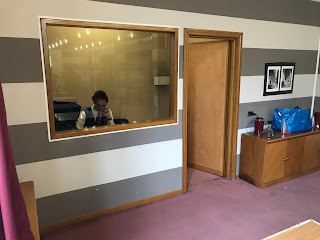 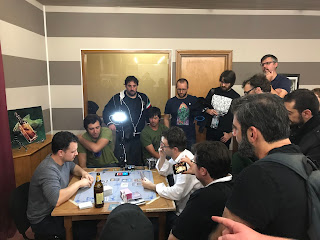 It was a strong contest between two high-quality players, and with an unpowered winner, a fairly unexpected outcome.  The edge was taken off a little when it emerged that he had been playing two Shahrazads in his sideboard (hereafter, two copies being Italian Restricted?), but this was a minor quibble considering the champion beat all-comers without Ancestral and the like.  A worthy winner.

The day after we flew back shortly before a rainstorm stranded many in the airport.  My verdict on Fishliver?  A solid event hosted by organisers with a massive and heartwarming passion for Old School.  My experience was that it was on the more serious end of the spectrum in terms of playing style, but I would recommend anyone to give it a try if this is their preferred mode of Old School. 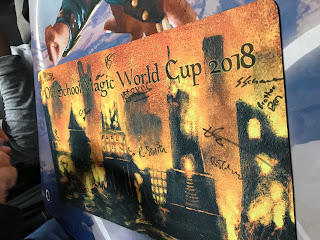 One month later, London played host to the Old School Team Cup, organised by Chris Cooper.  This was in 'team unified' format.  Swedish banned and restricted lists, UK card legality, and with the team-unified proviso that if all the decks and sideboards were put into one mega-deck, it would be legal - so only one Chaos Orb per team.

Chris went all-out in the preparation for this, with a fantastic venue, custom playmats, and a dizzying array of prizes: 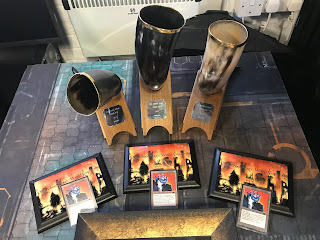 My team 'Argothian Forest Preservation Society' consisted of Brothers Ben, Stebbo, and I.  We decided to make Ben the 'general' and give him the majority of the Restricted cards, with Stebbo and I playing around this with the intention of picking up the second win needed to win any round.

Before the games kicked off, our team had an initial moment of good luck as Brother Ben discovered this little bonus sellotaped to the underside of his chair: 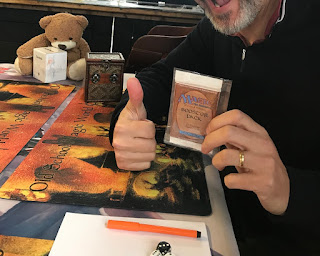 With that excitement out of the way (and no, dear reader - he didn't open it), we got stuck in.  I was on red with a small green splash and didn't have a good day with the cardboard - a few unforced errors and some tidy opponents. 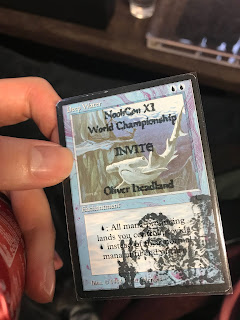 Pleasingly though, despite the huge draw of three n00bcon spots being up for grabs, the whole day was full of a relaxed vibe with the beers flowing constantly. 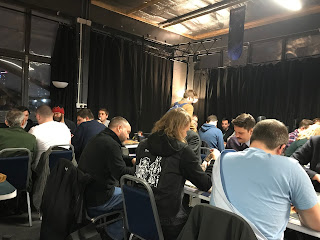 It took three rounds for me to establish my first match win, but Ben and Stebbo played well enough for us to be in with a distant shout of making the Top Four.  Unfortunately, we didn't quite succeed.

After some additional hi-jinks and many more beers, Team South Africa took home the win, and will be attending their first World Championships - a great result for the community. 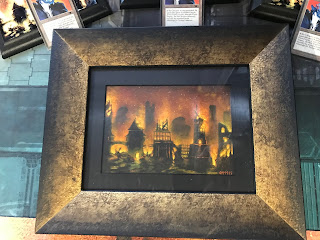 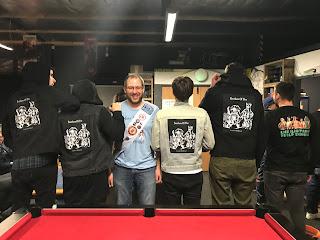 Guest of honour DFB, all the way from New England, is flanked by assorted team members

This left one event to close out the year - Brother Markus's splendid annual now-tradition of throwing open his hospitality for a Christmas bash including the cracking of some product.

This year we went about as deep as we are likely to be able to go and assembled this mountain of vintage cardboard: 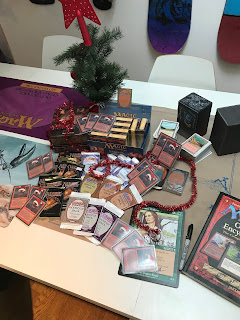 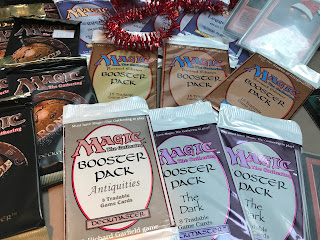 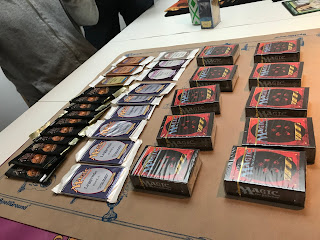 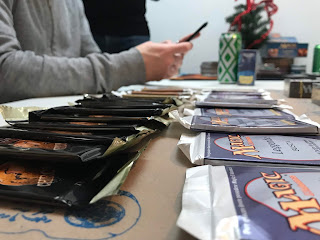 It was only appropriate to deal with this mountain with a Rochester Draft - opening all the packs in front of each other and taking it in turns to pick a card at a time.  To mark such a historic occasion, we even had Brother Scott on commentary duties.  Everyone had the opportunity to open a particularly valuable pack.

So what happened?  My own Fourth-ed starter, which I opened prior to the draft, had the following three rares: 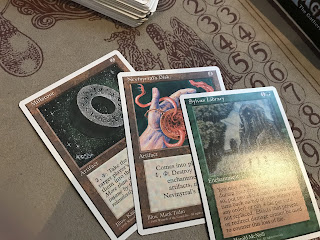 With these in-hand, I reckoned I had a pretty good chance of taking home the goods, because Millstone in Limited is, as Bryan Manolakos would say, "a house" - an incredible win-con in a world with everyone running 40 cards.  My ambition was to draft green and black and aim to sit there until I could Mill my opponents to death.  Sadly, the best laid plans of mice and men can go awry and too many of us were drafting green, leaving my deck a little puny.  I did manage some nice millings, but not enough to prevail.

When we moved onto the draft, what it really remind me was quite how terrible most of the cards in these sets are! We opened a pack of Antiquities that contained 8 howlers, and arguably Legends (we had Italian) was even worse.  There were, however, some great moments of drama - Brother Oli cracked a pack-fresh Revised Bayou, and then took second-choice on a Legends booster that contained both Karakas AND Mana Drain.  So at least one of us made their money back! 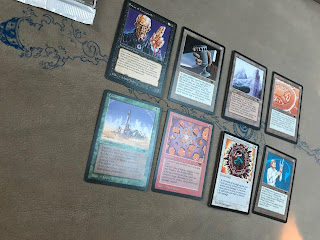 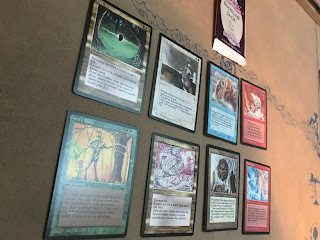 The day was packed with great fun and Jason ran out as champion.  When we had played our decks to death we broke out Brother Scott's sumptuous Old School Cube - a beautiful black-bordered monument to the format, and played long into the night.

Well - that was quite an ending to the year.  Not marked by the laurels of victory, but many happy memories.  It's been a privilege to be a part of the London scene and to see it grow over the year, and I'm hoping to meet more Old School legends, and enjoy more games, in 2019.
Posted by Jonas T at 7:01 pm No comments: