- William Shakespeare, Much Ado About Nothing

Both of these were evident as two plucky Brothers, myself and Brother Karl, joined the vibrant Stockholm community for Ivory Cup 2018.

Before all of that I had some special cardboard to deliver to a Swede in search of furthering his own obsession. The Brothers of Fire courier service™ was on hand to deliver these from GP Birmingham, safe and sound. 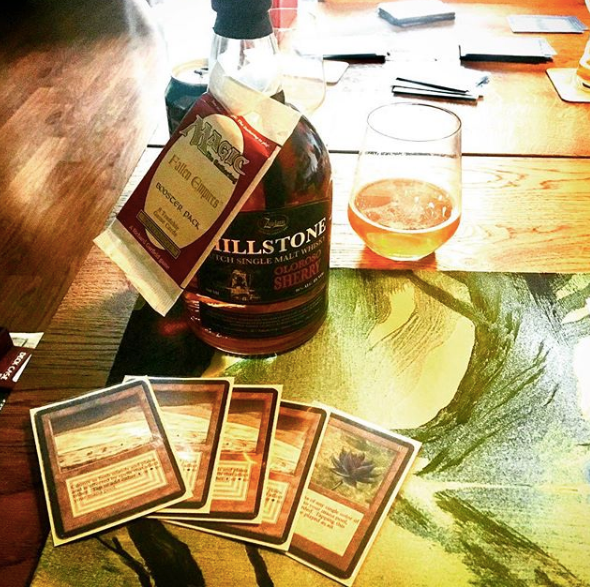 I’m sure you’ll agree receiving these cards is a special day in anyone’s life, and it was an honour to be involved! I was rewarded with some whisky, called Millstone, and some 94-era product - so very generous!

Karl and I arrived on Friday and were hosted by Gordon for some casual games until 4am! The Swedes definitely Old School hard.

The Ivory Cup itself was on the Saturday, and was a real festival of Old School in a hall filled with great beers, music and old schoolers. 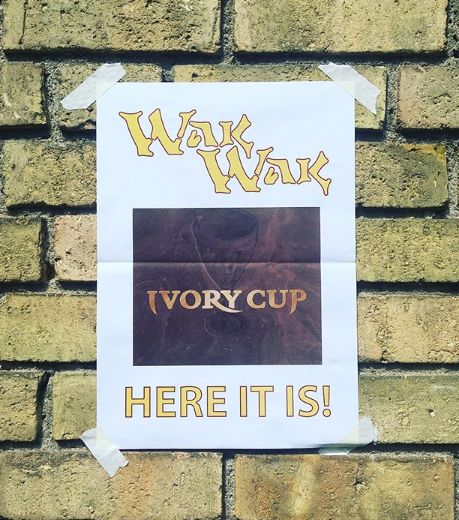 I’ve been enjoying playing URb of late, so running it back was an easy choice. I spent about an hour discussing sideboard strategy with Karl over breakfast before settling on this pile.

One of the key considerations with the deck is understanding when to shift gears within a match-up, and what your role is at any given point. This 75 tries to play to that philosophy, along with a few blowout cards, naturally... 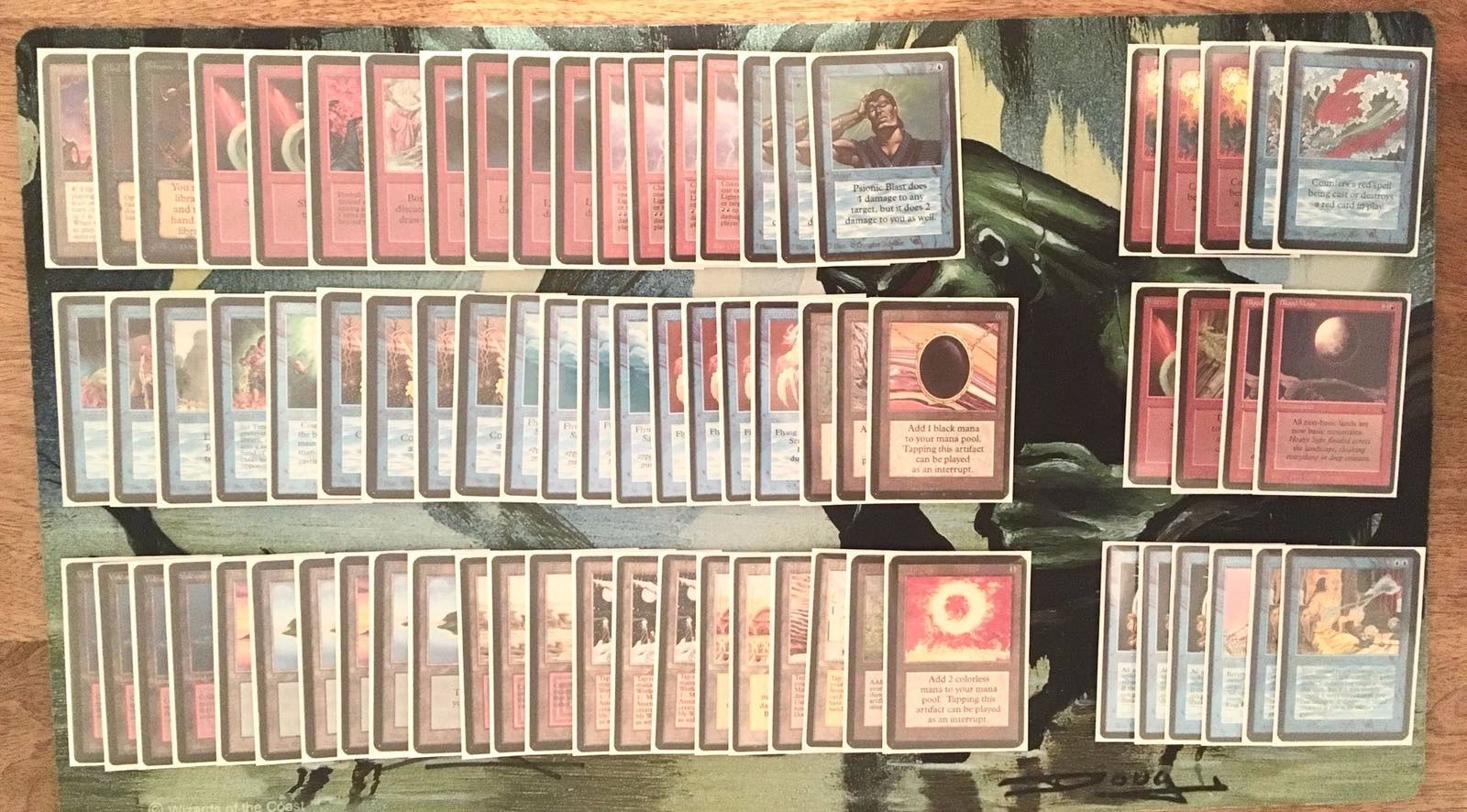 Kaj my opponent, was a really friendly guy from Gothenburg. I was able to take game 1 comfortably, but got unstuck in game 2. I used Timetwister to try and set-up a kill, but only succeeded in giving Kaj what he needed to win in a massive Fireball with REB backup. Game 3 saw Kaj’s Mana Flares become temporarily under the employ of the Brother of Fire, as I returned the compliment with a massive lethal Fireball, after a board stall.

The first of two games vs UG (see below!). Jesper was a great, very technical player and a formidable opponent. He also had 12 one drops and 4 Argothian Pixies, so is very much the ‘beatdown’ (or so it turns out...)

I took game 1, narrowly, and mistook his list for RUG (I’ve not faced pure UG before). This probably contributed to me losing game 2, along with a misjudged draw 7, which was partly down to underestimation of the power of the UG deck, and also pure greed. Naturally I didn’t learn my lesson, and in game 3 I eschewed holding up counters to instead cast a Serendib Efreet. I was duly punished by Jesper resolving Ancestral Recall, which ultimately led to him closing out a very close game.

My opponent, who I think made last year’s final, was on a spicy UB list. Sadly it was no match for the brutal efficiency of my own deck and was quickly dispatched.

Two very tight games with another tourist, Jason S, who hails originally from the USA and is simply an Old School fanatic! He’d kindly donated the Unlimited Berserk prize you saw earlier.

Sadly for Jason, despite attacking my hand with Black Vise, and attacking my real estate with Ankh of Mishra, my deck was able to take control and close out the win.

Match 5 - 2-1 vs Mono B Prison/Artifact control

This was a rematch from Noobcon, where Jonas (not that Jonas...) had put me away with a controlling brew utilising the Parfait ‘spine’.

Jonas was on a similar build today and raced away with game 1 under a Howling Mine/Relic Barrier which I couldn’t deal with.

Unfortunately for Jonas he couldn’t deal with my Energy Fluxes in games 2 and 3. Energy Flux simply wrecked him (along with a powerful Mind Twist for 5 on turn 1 of our decider!).

These matches are all on the Twitch stream link, as above, in case you’re interested…

These were very fast games, as my deck really hit top gear. My opponent’s good grace, and a nasty Mana Drain into a lethal Fireball is all I can remember.

Game 1- my opponent Max got off to a good start with a Serendib Efreet and a Mishra’s Factory, but wasn’t able to capitalise on this, and I was able to take control, and clock him with a run of direct damage. Game 2 saw a nice curve into a flock of Flying Men, who promptly did some heavy lifting. We were into the finals in record time!

Ah, that UG deck from earlier - turns out it was quite good and we were to meet it again in the final! This is how I remember it.

Game 1 was a slaughter, and even saw me miss a Chaos Orb flip on camera! Echoes of Gareth Southgate in ‘96! 0-1.

Game 2 and I’m sure Gordon had summoned a Priest of Yawgmoth to perform the last rites on my Ivory Cup run. The irony is that Jesper and I spoke at length about how the draw 7s are risky for me to execute successfully, without passing the turn to him and promptly dying (as I did earlier that day…). But in game 2 I had to use both to survive - with the second, the Wheel of Fortune, seeing me deal 7 in one turn, with another 7 damage sat in my hand unused. Very much snatching victory from the jaws of defeat. 1-1.


Game 3 saw me make some additional changes to the deck, and understand the match-up better. I saw that I needed to take a more controlling role than I had been taking before. Fatigue and rising alcohol levels in my blood saw me not play the tightest game of my life, but it was good enough, and after stabilising the board, 2x Flying Men and a Mishra’s Factory crashed home for the win!


The first packs of Magic I opened had Ice Age written on the front. But all those years later I’m still learning how to play the game. This tournament demonstrates this - I really feel that I evolved and developed my game through the day, and that’s the most rewarding part of the win!

JUST KIDDING! Clearly this awesome prize swag trumps all! But I do believe that you do still keep learning and improving, if you allow yourself to. This event is a good example for me - you can always play more games, and work on your own personal obsession. 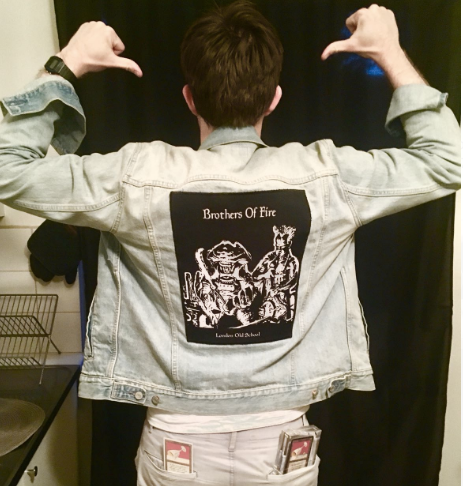 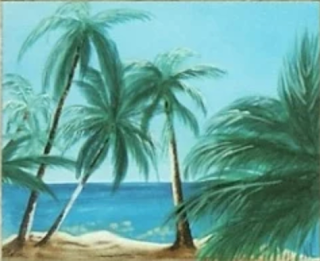 Remember the good old days? Before Recall got unrestricted? What about the good old days before that - kitchen table magic? Real flavour. Jedit Ojanen taking on Jasmine Boreal. Electric Eel vs Water Wurm. When you included your prized new card in all your new decks - just because.

Brothers’ Highlander is the casual house format of the Brothers Of Fire club. We are putting this out there simply to see if it resonates with others. It’s designed to encourage fun cards and unusual interactions and the rules may be tweaked periodically to keep the format fresh.

All decks of 100 cards exactly.

ALL cards are RESTRICTED apart from basic lands.

The following cards are BANNED: Library of Alexandria, Mind Twist.

Printing legality: Any non-proxy non-foil card with original art in the original frame is legal. Revised Serendib Efreet and Plateau are also legal.

Mulligans: Paris Mulligan is not played. Instead, after drawing their initial 7 cards, either player may declare a Gentleman’s Mulligan and show their hand to their opponent. In the event that it contains 0 or 1 mana source, or 6-7 mana sources (i.e. a mana screw or a mana flood), that player can shuffle their deck and draw a fresh 7. There is no limit to the number of Gentleman’s Mulligans that can be declared. (A mana source is any zero-converted-mana-cost card which produces mana - i.e. a land or a Mox, or similar).
Posted by Jonas T at 3:15 am No comments: