Have Strip Mines, Will Travel… Wanderlust part 2, by Brother Stebbo

Editor: Last time out our foreign correspondent Brother Stebbo was competing in the frozen North of the British Isles. Today he’s a little further afield... 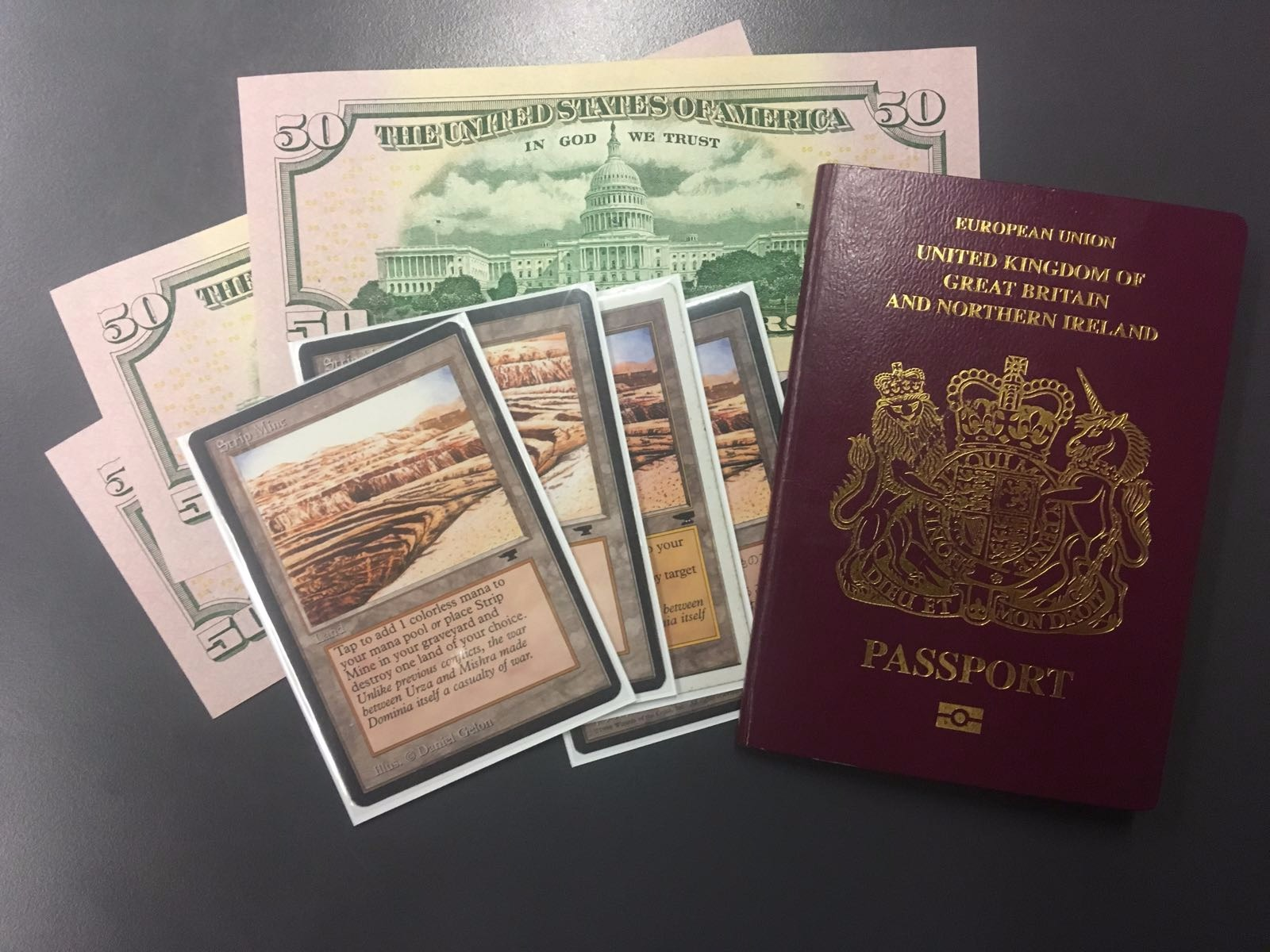 I was lucky enough to meet Shane from the Lords of the Pit at Noobcon earlier this year. I even did this to him during the Wizards’ Tournament…


Shane quickly showed himself to be a great sport, and one impromptu craft beer tasting later we were best pals… 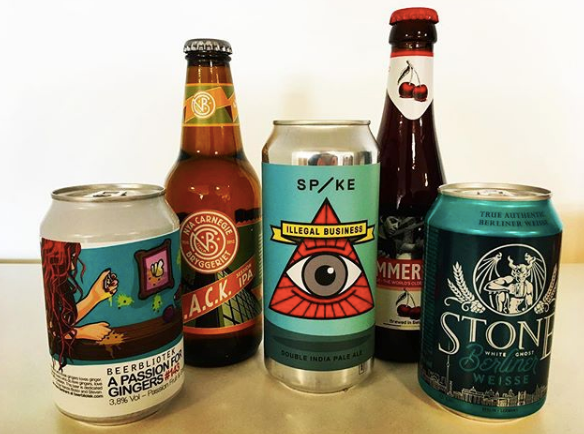 We’ve stayed in touch since so as you can doubtless imagine, I was thrilled at Shane’s enthusiasm when I mentioned that I was up for making an Old School pilgrimage to Chicago.

Indeed between Shane, Ray, Bob, Nathan, Jaco and the rest of the Lords on hand, I was really taken care of. We managed to find time for 2 Old School meet-ups, 1 pre-modern meet-up and another non-Magic meet “because it’s Sunday...”. My liver is still recovering.

This early interaction was typical of my time in Chicago:

Stebbo: Just landed and getting the metro downtown from the airport. Should be with you about 9pm after I drop my stuff.

Shane: Dude, we’ve been out since midday. Some of the Lords may not last much longer! Don’t go to your hotel. Come STRAIGHT to the bar…

Cue a night out till 2-3am (of course, with me dragging a huge suitcase around!)

A fantastic week where I was able to channel my inner Louis Theroux, as we drunk deep from the everflowing cup of subject matter that is ‘differences between US and UK culture’. Add to this with the continuing amusement I caused with my repeated, awkward struggles to tip ‘correctly’ (!) and you’ve got a great time on your hands.

Here are some pics to give you a feel:

Rather than take up space showering the Lords with superlatives, I’ll instead try to briefly describe the scene for our final meet-up:

It’s in a fairly trendy, but narrow, bar in a neat part, or “neighbourhood”, of Chicago. As is not atypical for the bars I’d visited thus far, the one serves a mix of regular beers and Belgian-inspired craft beers. These are pretty punchy numbers, clocking around 8%. It’s the beer equivalent of someone posting an Old School deck pic, and you notice that they are playing with Beta Volanics… (“wait a minute, those aren’t CE!!”)

The Lords have taken over the main tables towards the back. Elsewhere baseball is on the TVs and there is a resounding murmur from the patrons on the other tables, most of whom are either youngish workers or students.

I’m greeted warmly, immediately “hooked up” up a beer and soon settle in for some games. I get to play a few rounds, before swapping playmats with Shane and dishing out some prizes from the Brothers of Fire.


I have my pick of the prize cards, which include a tasty Millstone and a Hymn to Tourach (which is only usable in a game of Brothers’ Highlander™). Naturally I opt for my signature card: Spell Blast.

Shane and Ray were awarded generous flagons of booze for their generosity in looking after me. Nathan took home the honorary Brothers of Fire award for truly embodying the spirit of Old School.


On top of being an top laugh and sport, Nathan attended every meet-up during my stay (which was like 4!) and was playing a sweet mono green brew dripping with flavour and Moss Monsters. Well deserved indeed!

I honestly had a blast in Chicago – it was everything I was expecting as a city to visit bustling with culture, pals and Old School. My thanks again to Shane and the crew. We look forward to hosting the Lords at a COPcon in the future! 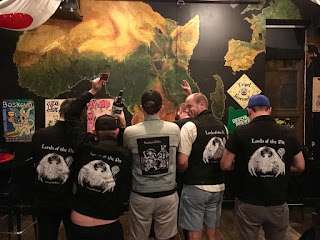 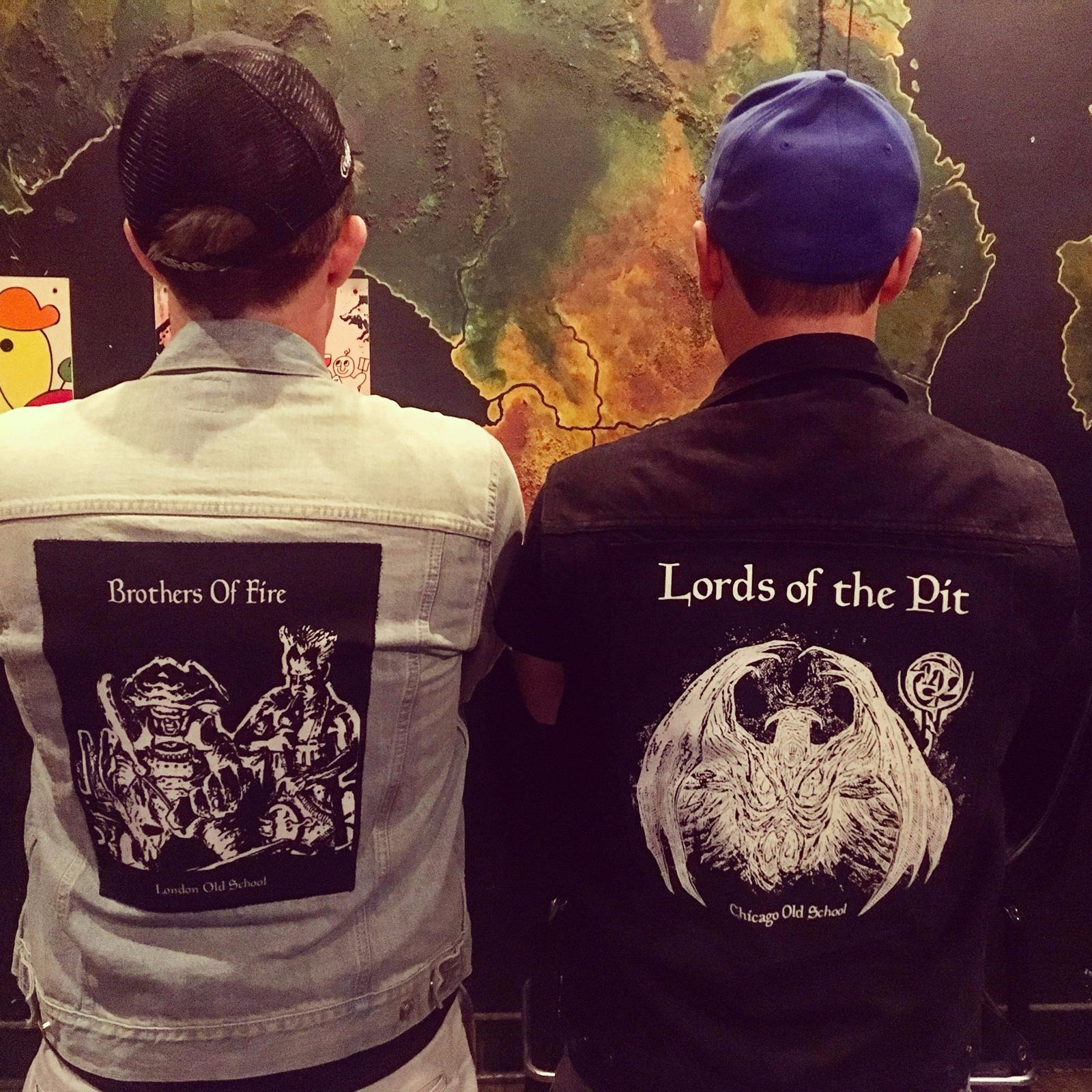 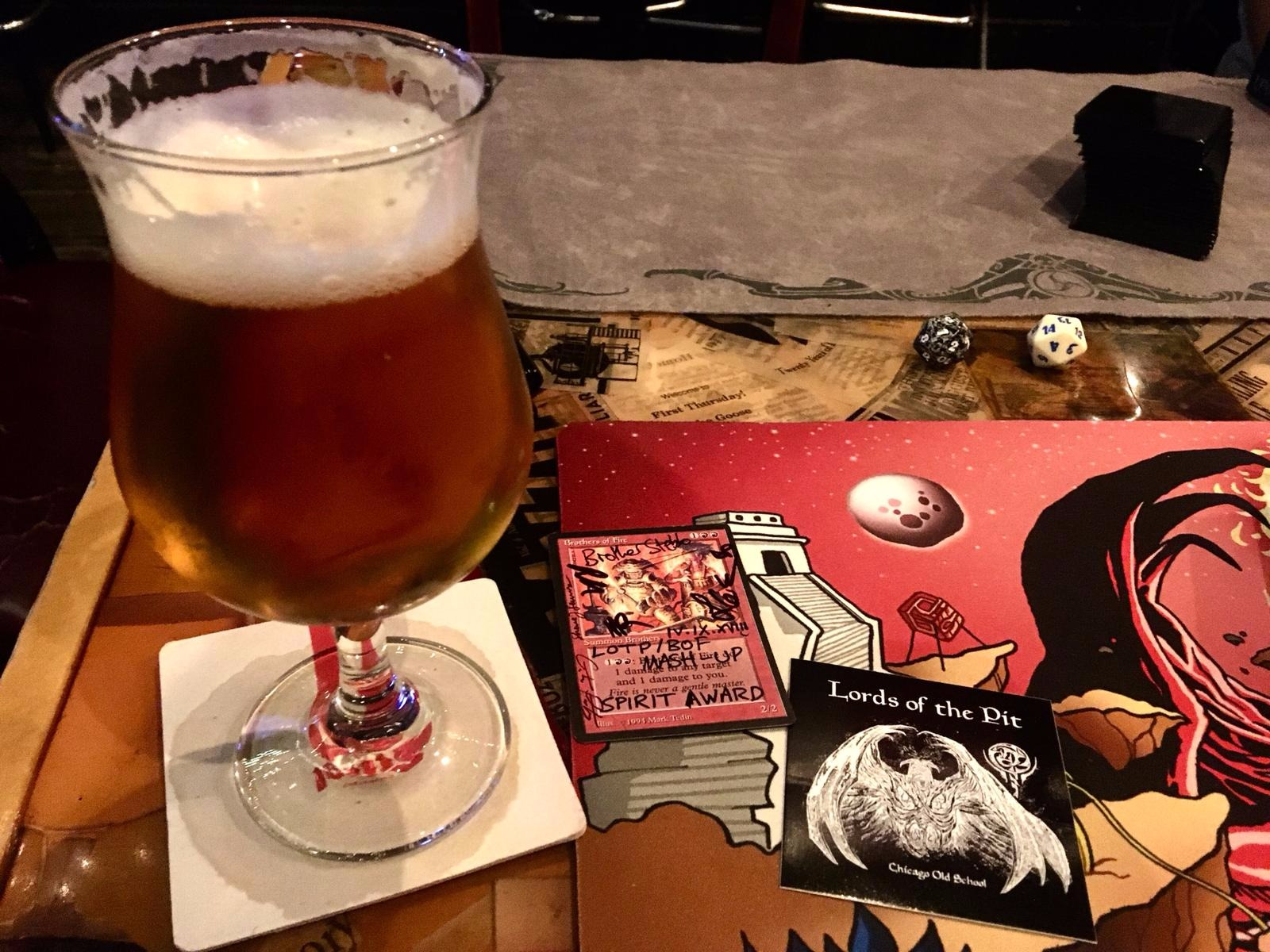 [Editor: And then Brother Stebbo went home, without further incident?
Wrong!!! He shipped out to Boston…]

Dave, or DFB, needs no introduction.

However it would be remiss of me to not mention how we met!

However I did get to Psychic Venom his Library (I know right, who plays LoA in a fun tournament!?)

Simultaneous to my communications with Shane, I’d also arranged to meet the New England crew for some games. The NE folk meet regularly at a bar called Moogy’s in the suburbs of Boston, and this was the venue for our showdown.

To tell the truth, I was pretty nervous. Boston is an intimidating place for a Brit. We haven’t got the best historical win-loss record here… Indeed the NE Old School apparel makes references to this very thing! Almost like they’re taunting us! However I was remotely given some words of encouragement from my fellow Brothers.

I also had the key-line ready if the thorny issue of the rules differences between UK and US Old School communities came up: “Well, if you didn’t want to be playing with 4 Strips, maybe you shouldn’t have disrespected our tea!”

I had arrived before DFB, however quickly found some of the NE crew and got down to some Alpha 40. Known as ‘your deck for the Wizards’ Tournament’ back in my day, Alpha 40 has really caught the imagination of the Old School community of late. NE is no exception and the momentum is palpable. Or, as we like to say in Alpha 40: “a Forest enchanted with Wild Growth gathers no moss…” 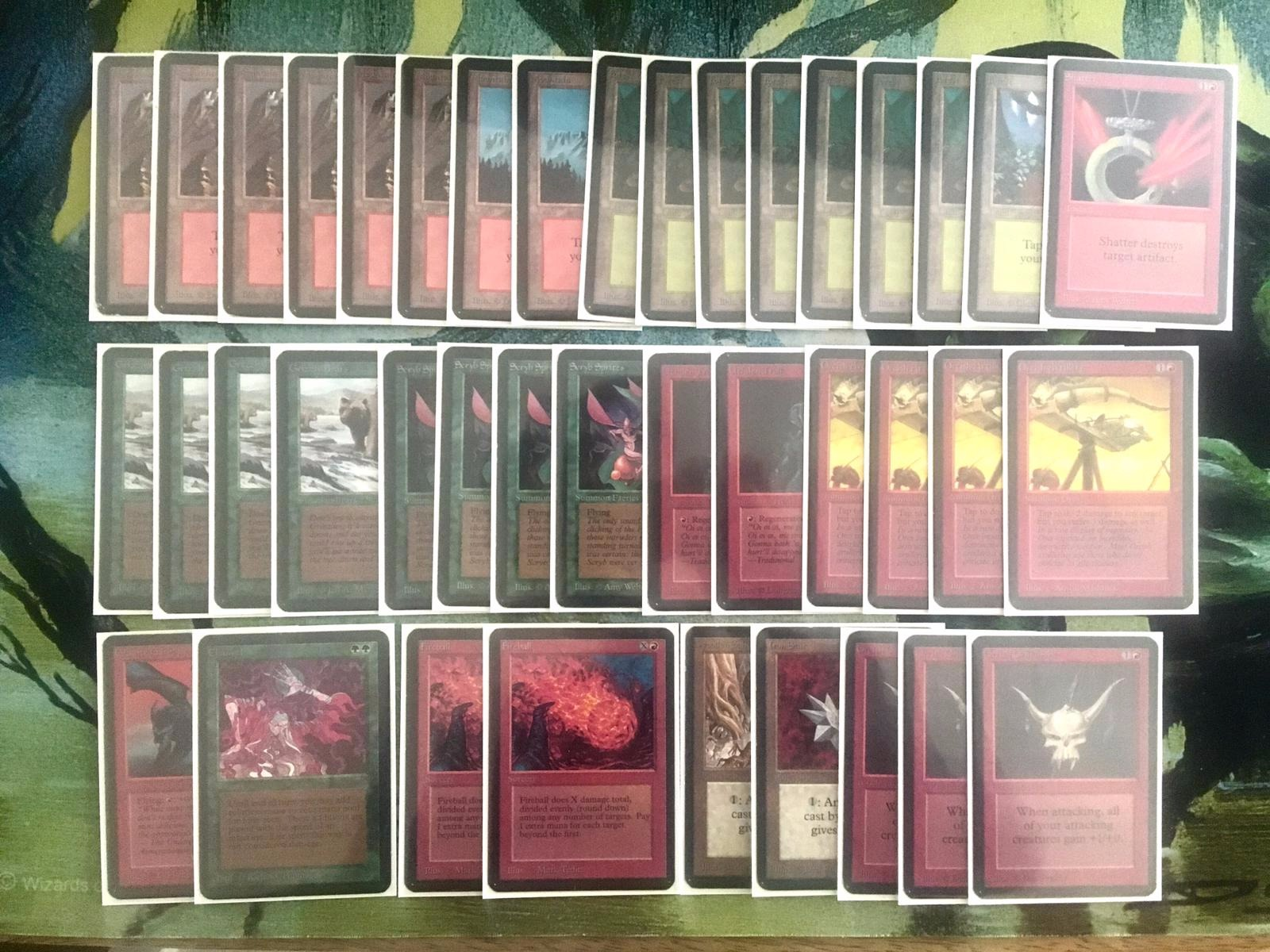 I played some great games against a BU deck, and then had some games with Kramer in the RG mirror. These turned out to be Kramer’s first paper games of Alpha 40. My deck was just able to get the better of his, in some games played in the best spirit. I was touched that he remarked later online that he’d enjoyed our games and was “instantly hooked” on the format. I look forward to our next clash! 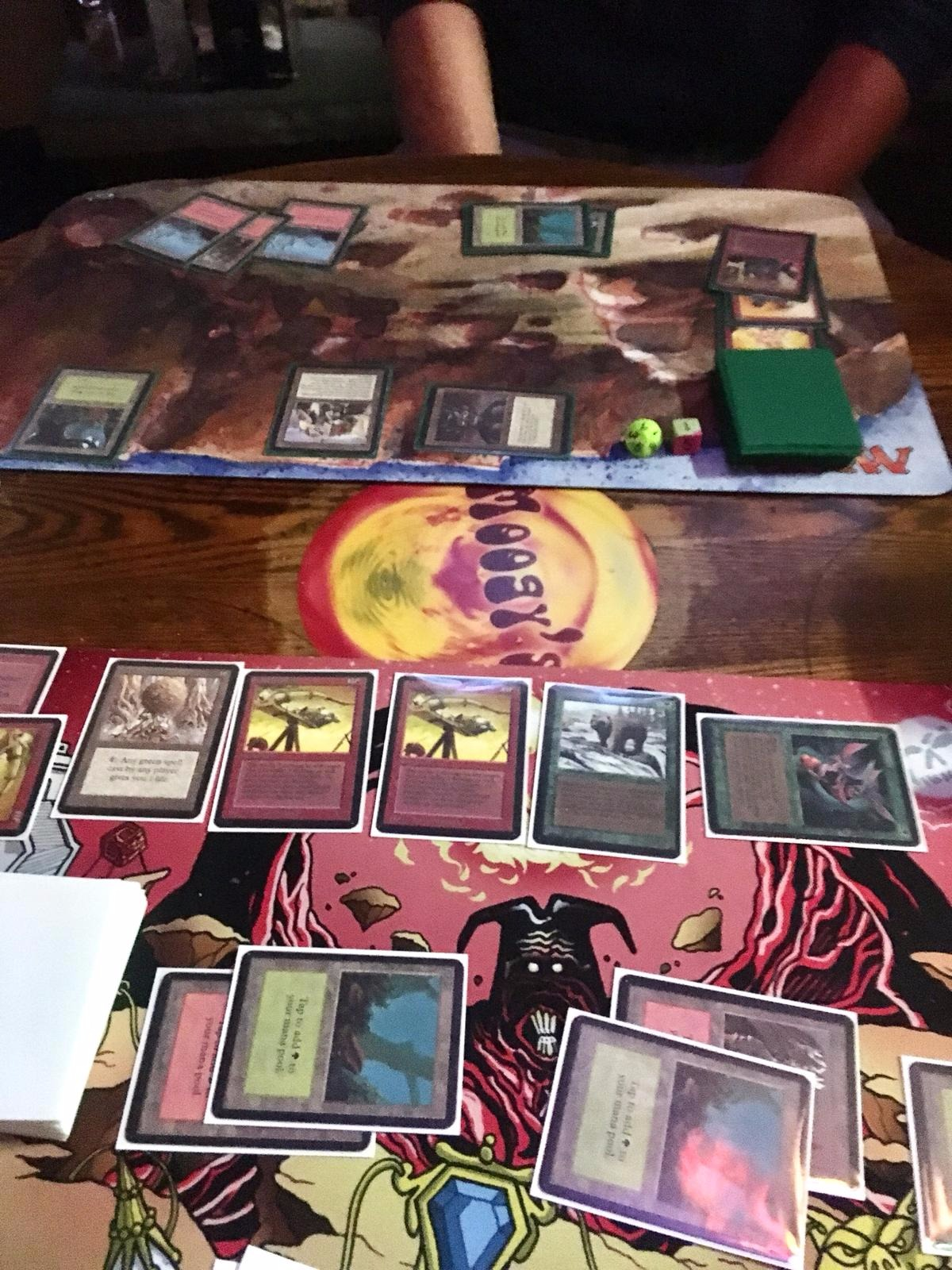 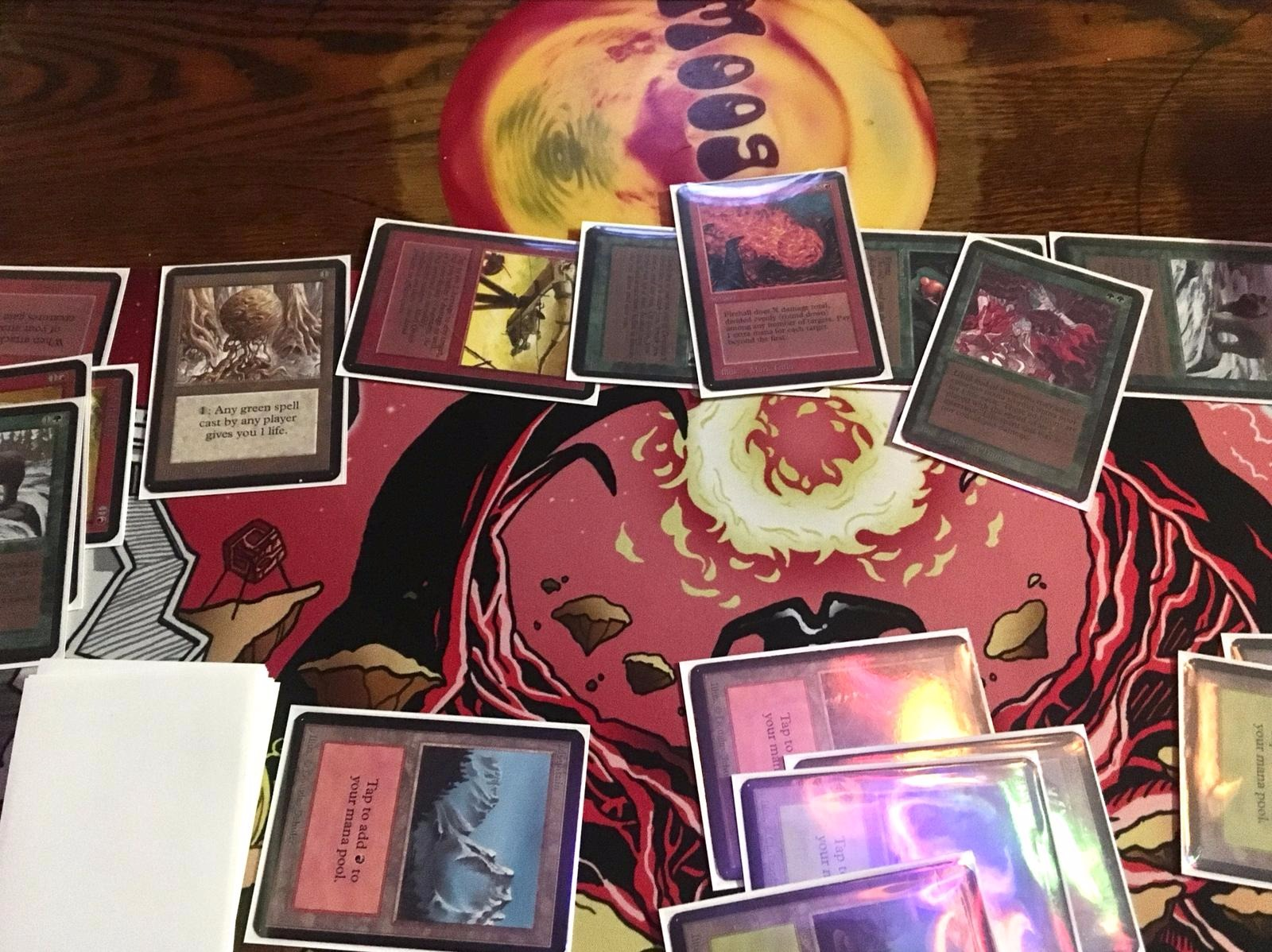 From there, I dove into some games of Old School proper. First off, I was thrilled to meet Rich Shay, a whose Vintage content I have long-enjoyed. His appearance was a welcome surprise to me, as I was unaware he was a convert to the format (this is one of the advantages of not following anyone’s Twitter, it seems).

I was playing a riff on the recent Tax/Tower decks that have been popular in Old School. Appropriately, I had a partial aggro transformational sideboard into Atogs.

Rich explained (apologetically) that he was testing for Lobstercon, and was running the Deck. I’d be a hypocrite to in any way criticise such a move, and we enjoyed some close games. However my Shatters and REBs abandoned me when I needed them most… 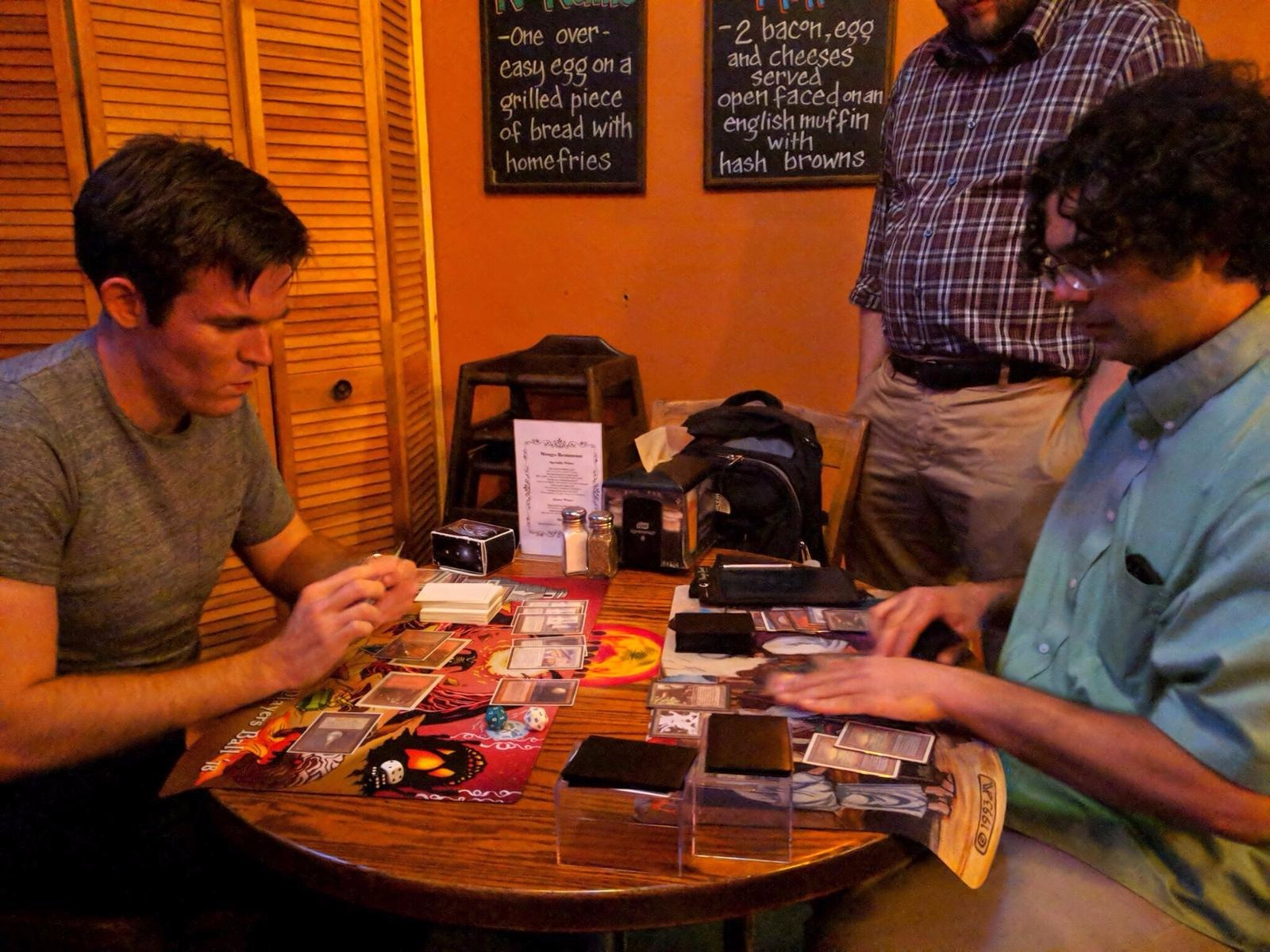 The highlight was that I did get to surprise him by casting an Atog in our first sideboard game. For my part, it was definitely one of those Eureka moments capturing elements of the Spirit of Old School, here newfound mutual respect and sheer cardboard joy. Although it didn’t last long, as this Atog was soon packing his bags for the arable fields of northern Massachusetts.

I had two games of Old School left in my trip, and fittingly they were played against both winners of the honorary Brothers of Fire cards, part of a special double-blessing from the elder Brothers ahead of this event. 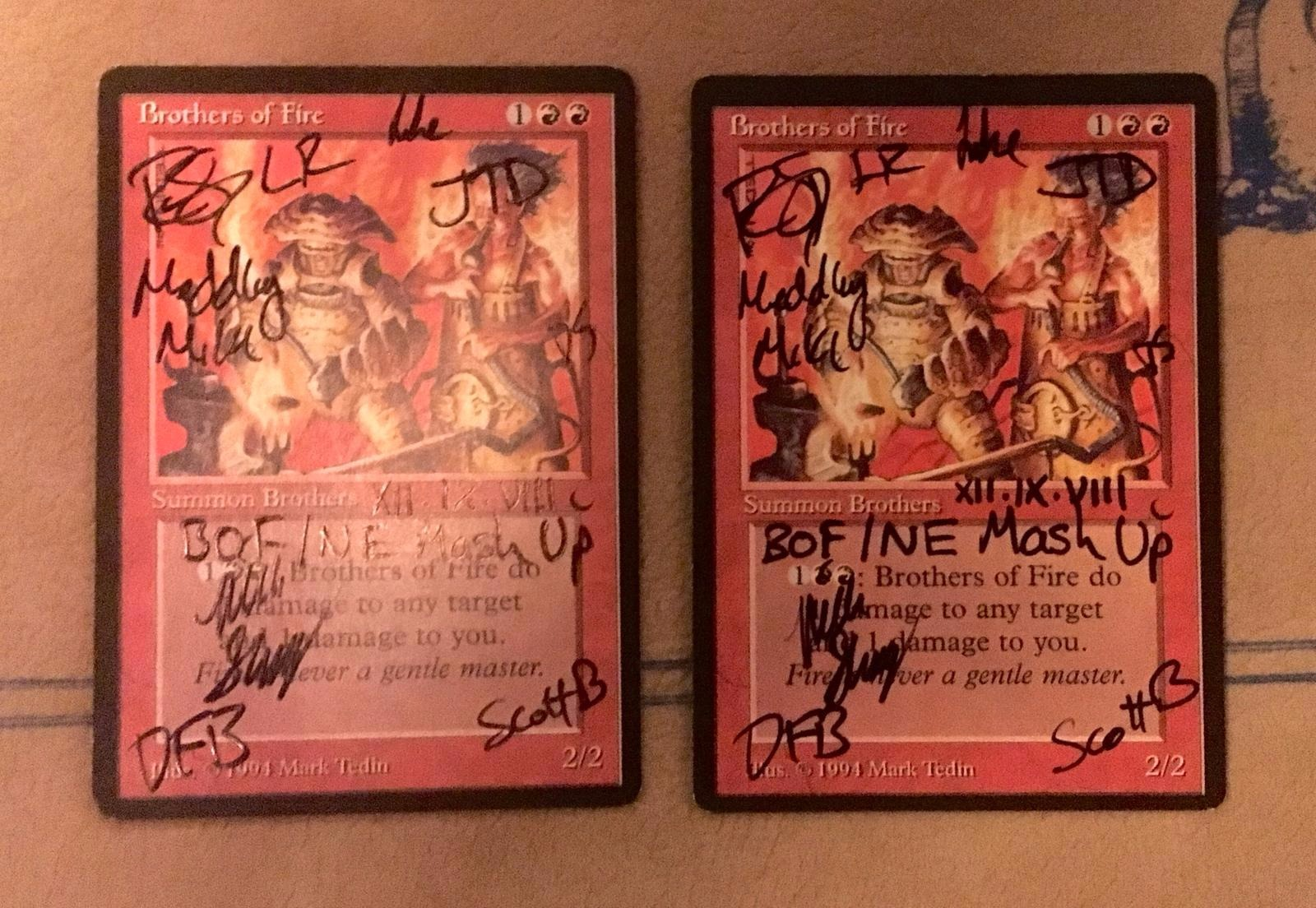 The first was against Derek, a NE community stalwart, who played a deep mono black brew. Or let me put it another way: it as drenched in flavour as a Moogy’s melted sandwich.

Sadly for Derek, Tax/Tower is a bit of a bête noire for his deck, however his refusal to concede in the most treacherous of board states was a credit to his tenacity and determination to discover my wincon!

The funniest part was that after our games, I suddenly had a slightly awkward feeling. With one Brothers of Fire reserved for my final opponent, I’d resolved to give the other to the player of the night who best encapsulated the Spirit of Old School. I’d been tipped off that there was such a player in the NE community, and naturally I was ready to follow the recommendation of my gracious hosts. But my games with Derek had been such a blast that I felt he was deserving as well!

So I had a quiet word to DFB, and we quickly established that Derek and this unnamed “NE community stalwart” were indeed one-and-the-same person! Phew! 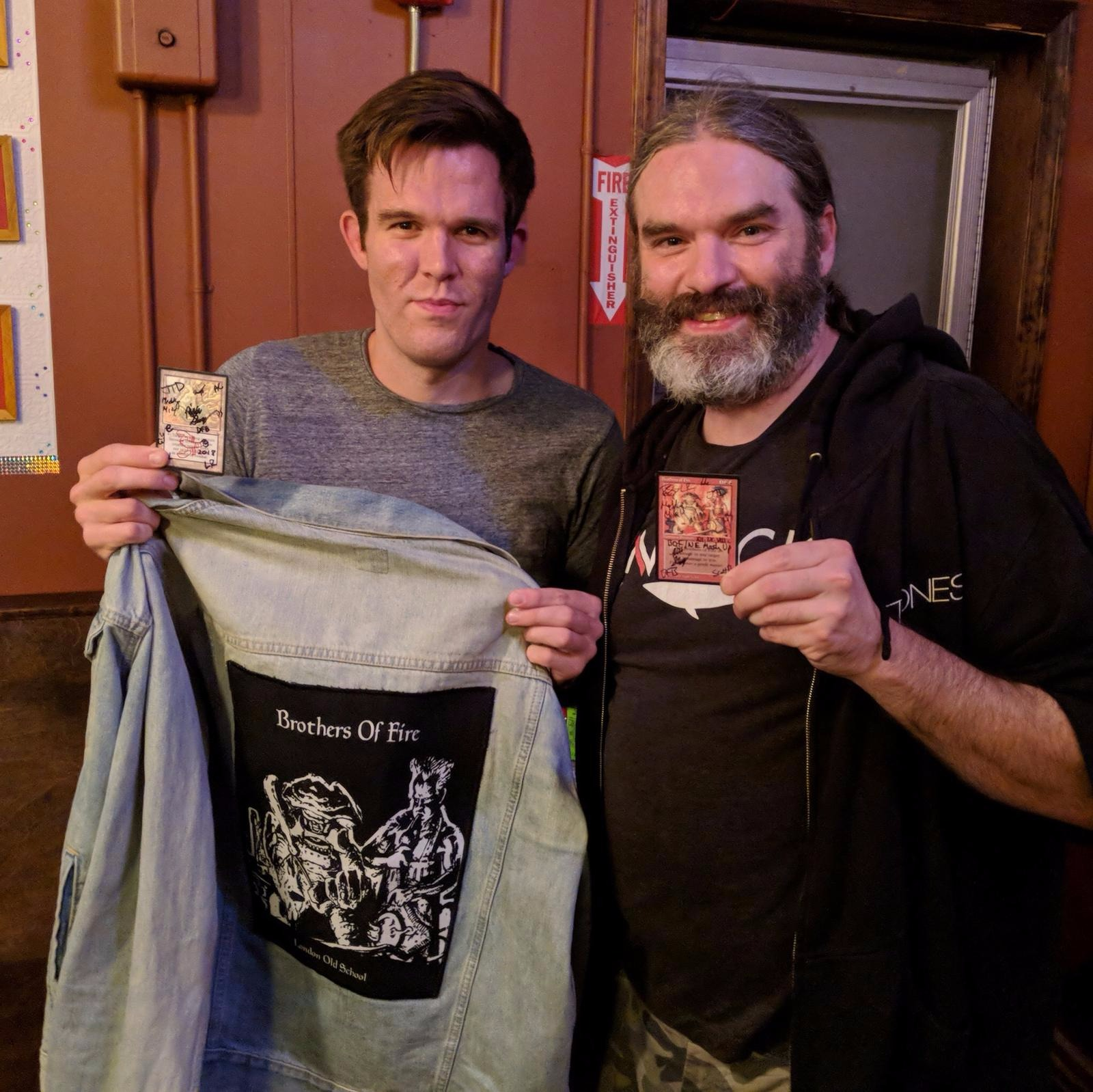 Fittingly, my final games were against DFB, which to my surprise I was able to edge out with a big Land’s Edge and some beats from Uthden Troll. Although sadly DFB and I were too caught up in discussions on the finer points of the Old School format, so neglected to document our games.

It was then time for pics and prize cards and saying goodbye to my newfound friends. I was touched by the prize card I was awarded – a Lobstercon test-print!! My thanks to DFB and the NE crew for being such generous hosts.