About five months after Andrew, Pieter and I won the Team World Cup and got our first ever n00bcon invites, the day had finally arrived! I put quite a lot of thought into my deck over that period, and was pretty happy with what I'd come up with given my constraints - namely that most of my collection is Revised / FBB, which are allowed under UK rules but considered proxies in Sweden.

I couldn't afford to upgrade any of the expensive stuff (duals etc), but I was happy to buy Unlimited random stuff. So that meant I had to go mono-colour, and because I'd recently acquired a Time Walk, an Ancestral, and a Sapphire, I figured I should go blue. Unfortunately I certainly couldn't afford to get Swedish-legal Dibs and although Brother Ben had kindly offered to lend me some, I personally think it's bad mojo to borrow cards. I also don't like playing obviously sub-optimal versions of a given concept (happy to play sub-optimal concepts though), so I wanted to find a mono-blue deck that didn't even want them. I toyed with some weird Ghost Ship / Giant Tortoise control deck, but Ben gave me the sensible advice to play something quicker / easier so I'd have drinking time. I eventually settled on fish!

The only lists I'd seen running the Pearl Trident crew were pretty classic suicide blue builds including Dibs and Unstable Mutations, and generally few to no counters. Some early playtesting convinced me that Unstables suck (mostly because it's so easy to get two-for-one'd, and they're a dead draw when you have an empty board). I also really like countering spells, so I decided to go more in that direction. Ben helped once again by suggesting main-deck Energy Flux (good call!), and then I wanted to play Psi Blasts and a couple of Control Magics (strong card I think). With six three-drops already, I was able to tell myself the deck didn't want Dibs because they'd ruin the mana curve (and in retrospect I think that may have been true!). Anyway, after a lot of thinking and a fair bit of testing, I settled on this list: 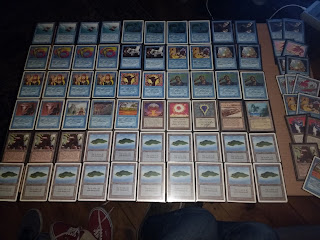 I got to Gothenburg around 6 on Thursday evening and ended up having a great first day and drinking until 3-ish. After breakfast and then pizza, we got to the pub a bit early and quite thirsty, only to find that it wasn't open yet! But there was a great atmosphere already and before too long they let us in. At that point I was feeling quite excited and moderately optimistic, but basically I was hoping to win more matches than I lost. Anyway, after a fair bit of waiting, much chatting and a couple of beers, we finally got our first pairings.

I remember shockingly few details from the day's play but here's a rough overview of what happened. Round 1 was against Will, who'd I'd been chatting to earlier and had come all the way from America. He was playing (as I would later discover) the same 75 as Svante and Brian - a finely-tuned and rather potent Atog build. But as luck would have it, I got lucky - or rather, Will got unlucky. I think he drew something like 4 or 5 lands total in two games and the fish came out on curve and made good use of Energy Flux in game 1. Will was a total gent about it, but nobody likes getting mana screwed. I was quite relieved to win my first match, in part because I figured my deck would actually do better against the higher end of the field (things like white weenie or green ramp would have wrecked me I think). 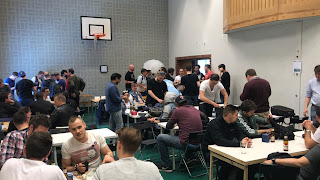 I ended up winning my next three matches as well, one of which was against Svante. I didn't yet know that it was exactly the same list, but it was clearly Atog. This time round we did actually have real games, but luck smiled on me again. Flux did some good work for me, and City in a Bottle did some good work for him. I think I managed to win one of the games after Svante's deck didn't give him a single land on a Timetwister, allowing me to finish it with my seven new cards. In the last game, a lengthy back-and-forth led to the point where Svante had nothing much on the board, and I had a DanDan and two flying men, with one Counterspell in hand. He played a Bottle, which I obviously had to counter, but he followed it up with a Balance - his last card in hand (I had several). Luckily for me I went on to draw a few fish while he drew vices and land, allowing me to sneak the win.

In round 5 I was paired up against Bryan, who finally got revenge for the Atog list. In the first game he had to mull down to 4, ultimately keeping a hand with no lands. He was on the play, so his first turn involved doing literally nothing. Needless to say I was pretty confident of the win at this point, but it wasn't to be. I had kept a hand with just one land and a Sapphire (a reasonable keep on the draw for my deck), but I ended up drawing only one more land in the game. He dropped an early vice (turn 2 maybe), and I happened to have a hand with mostly counters. The net result was that I couldn't play enough cards to get under the vice, and didn't have much by way of pressure. The vice and a bit of burn ultimately did me in, for a rather embarrassing loss. The second game was another sound beating, leaving me on 4-1 and bringing my winning streak to an end.

At this point I knew I couldn't afford another loss, and fortunately I managed to win round 6. The final round of Swiss was incredibly tense, since the winner would make the Top 8 and the loser wouldn't. I was paired up against a gentleman whose name now escapes me, and I had no clue what he was playing. In contrast to the rest of the day, this match involved minimal chit-chat - we were both focussed on getting the win. In the first game he played a Sylvan, duals of various colours and quite a few restricted cards, but his deck didn't really do anything. I had a fairly aggressive start and won it quite quickly with a swarm of little dudes, but I was left with no idea of what he was playing. Having seen that he played islands, I boarded in two more DanDans and left it at that. In the second game it quickly became apparent that he was in fact playing Twiddle Vault, and despite drawing loads of extra cards off his howling mines, I wasn't able to finish him before his deck went off big time, taking about five turns in a row by recurring Time Walk before eventually dropping the Vault with multiple Twiddles in hand, at which point I scooped (although in retrospect I maybe should have made him play it out - he still needed to kill me somehow).

Having now seen what the deck did, I boarded out my Unsummons and Control Magics and boarded in more Energy Flux (for the Mines) and a few other things. I played first and dropped a 1/1 dork, followed up by two more on my second turn. But there was a nasty surprise waiting for me on his second turn: Mana Vault into Erhnam, follwed by another Mana Vault and another Erhnam on turn three! Turns out he had a transformative sideboard that made it more of an Erhnageddon type thing. Suddenly my hopes of victory were dashed, having taken out most of my answers to big creatures.

After a turn or two of me swinging with little dorks and him swinging with big scary Djinns, I managed to kill one of them by blocking with a Pearl Trident and then Psi Blasting, leaving me on 3 and him on a lot more. As luck would have it, I top-decked Chaos Orb. This was probably the highest pressure flip I've ever had to make, but I made it and took out the second Djinn. Miraculously he drew no further threats, and over the next few turns I managed to kill him with a few fish.

To my amazement, my tiebreakers meant that I finished the Swiss in second place! My quarter-final match ended up being a bit of an anticlimax, losing fairly quickly to an opponent playing a different Atog build with Su-Chi and some other stuff. In retrospect I think I was playing quite badly (there was a long delay before the Semis, during which the adrenaline wore off and the beer started catching up with me), but I'm not sure if my misplays were decisive. Of course I would have loved to go further, but I was totally happy to have gotten so far and walked away with a trophy and, fittingly, a copy of Deep Water! 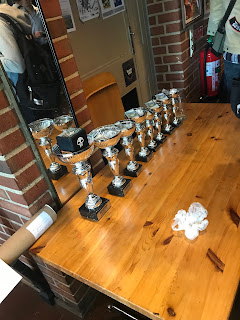 Finally, I wanted to share some thoughts about the deck, having played it quite a lot against a wide range of opponents (both at n00bcon and in preparation for it). Overall, I'm certainly not going to pretend it's a Tier 1 deck - I wouldn't have gotten as far as I did without quite a lot of luck. But it's relatively affordable, fun to play, and stronger than it looks at first glance.

In terms of the creature suite: Flying Men are great (pity they die to Bottle), and the Merfolk (mainly the Lords) are possibly even better. The DanDans proved surprisingly strong, even in main deck (though again the Bottle thing really sucks!). At worst, they're a 4/1 wall for UU, which trades with pumped Factories, Su-Chis, and various other things. At best, they're a pretty fast clock! The Serendib Djins didn't pull their weight (extremely situational), so I plan to cut them for two Clones (mainly to copy Lords). I'm not certain Dibs would actually make it better, but they might.

In terms of mana base: It felt about right overall. Not sure about the Sol Ring - it should maybe be a 4th Factory or another Island).

In terms of other spells: I was VERY glad to be playing counters - you need them against all the higher-impact cards out there. Adding a Mana Drain (mine is Italian) probably wouldn't hurt, but the Spell Blasts were pretty great (so many of the things you want to counter are only 1 or 2 mana). The two main-deck Energy Fluxes were very useful, as were the Control Magics. And the one main deck Phantasmal Terrain was pretty handy, mainly as another answer to Library, Maze, and Factory - but occasionally to make an Island for the fish. A second one wouldn't hurt, but there isn't anything I'd cut for it.


I hope someone out there finds this useful! Happy Fishing!
Posted by Jonas T at 1:38 pm