An ongoing series where Old School players reflect on their favourite cards. For this iteration we have a very special guest post by Magnus, the Father of Old School and convener of n00bcon.

In early 1995, around the time Revised was phased out in favor of 4th Edition, Magic in Kikås, Mölndal, was an endless sea of discovery. The handful of us versed in Magic played with whatever cards we managed to scrape together. The meta was as small and local as it got. There was no local game store to speak of, and for sure we didn't have access to any comprehensive card lists. For the majority of the world, this was the pre-internet days.

The first true chase-card I ever encountered was Clone. I don't know why we hadn't opened any of them at our local scene; most of us owned at least a couple of Sol Rings and other uncommons from Revised. Juggernauts or the odd Demonic Tutor wasn't that unusual to run across. An outsider would surely even find the occasional dual among our chaff, but none of us had ever seen a Vesuvan Doppelganger. 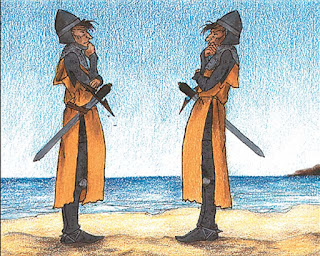 I believe that I first came across Clone when I ventured out of the comfort of my local scene and visited Björn Albihn. Björn was an old friend, as old as they get. His parents are my godparents and my parents are his, so our families have been close since way before Magic - or the two of us - entered the equation. Björn doesn't play these days, but he is still an important part of my life. And my ventures in Magic for that matter. He is the sculptor responsible for the champion trophies at both The Wizards' Tournament and n00bcon X this coming Easter. But back in 1995 he was living in his parental home the next town over. Our families would often celebrate the holidays together - Easter, New Years, Walpurgis and others - and I believe this was such an occasion. Maybe the Easter of 1995.

I heard that he played Magic, so I brought my cards. And I got my first taste of the power of Clone. When he was behind, Clone would even out the battlefield. When I got a Sengir Vampire, he would easily match it with his Clone. When the board was at a stall, Clone would turn it into his favor. And when he was ahead, Clone would make his Mahamothi Djinn into two and my chances to recover would be null.

These days the matches aren't focused on creature combat in the same way, but whenever we start swinging this is still true. Clone will always be the best creature on the battlefield. For only four mana (a price we didn't really consider back then), the greatest foe or the strongest champion in sight will join your ranks. Clone could also be used as mana acceleration in a more controlling deck, casually copying an activated Mishra's Factory. Or go nuts in decks like The Machine, playing the part of either an extra Hell's Caretaker or the second Triskelion needed to go off. Always doubling its duty by matching an opposing Juzam Djinn or Serra Angel whenever defense is needed.

I might never have wanted a card like a wanted that Clone. But it was not for trade, and as such I would have to search elsewhere for it. When I got back, I knew I needed to step out of my comfort zone and see what the deeper parts of Möldal could offer. One of my closest friends, Oscar, told me that a certain Viktor had a collection far beyond ours. Viktor had been our old scout master and was older than us by five or six years. When you are 11 years old, that is a lot. Viktor smoked and had relationships we were yet to comprehend. But he knew me from the scouts, and I knew where his family lived.

I think I just went to his house and knocked on the door. They were a fairly large family of seven, living in the Lackarebäck part of Mölndal. We got to talking and playing, and Viktor's collection truly was at another level than the ones I've seen before. Not that he had Power or stuff like that, of course, but amazing creatures and effective spells were abundant. I don't think I ever had seen a Serra Angel in play before; our small playgroup had decided to ban white from our games as the protective nature of the color was deemed "chicken". Viktor had a Clone that I managed to trade for, probably getting seriously ripped off value-wise in the process (as was the custom of the time). I don't remember that much of our trades other than that I traded a Birds of Paradise for a pair of basic lands. But those cards never really mattered to me, and now I had a Clone. As a small sidenote, I also had a better relationship with Viktor, which would prove fruitful a few years down the line when I needed help to buy spirits from Sweden's heavily ID-enforced liquor stores. Clone surely helped lay the groundwork for my youth. Come to think of it, my improved relationship with Björn via Magic got me invited to a middle school dance where I got something most people would describe as my first kiss. But that story is neither here nor there.

My Clone was soon a card to fear in our local meta. Even David, the local mister suitcase with the best collection of all of us, couldn't hide his envy. David had all the big cards; Lord of the Pit, Force of Nature, Island Fish and Colossus of Sardia. But with my Clone I also had them. I could just wait for him to cast one of his monsters and immediately match it. He offered me piles of cards for it, multiple beasts, strong spells and two or three duals just for that single Clone. He really wanted to be the guy with all the best cards. But I wouldn't budge.

Soon thereafter I got the chance to take a trip to Gothenburg city where I found a game store selling Magic in both packs and singles. I was astonished at the prices of some of the cards; both high and low. A dual land was almost a shocking €9. But on the flip side, they had two Clones in store for only €2.50 apiece. On of them was horribly off-center, but I could hardly care. It was time for my first ever singles purchase. 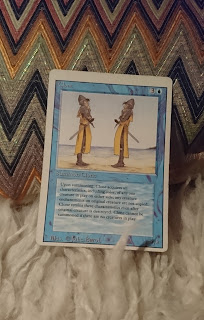 So now, thanks to my travels, I had three Clones. David still offered me piles of cards for just one of them. Well, any one of them except the "misprinted monstrosity" ("det feltryckta fanskapet"), which he didn't care for. Even though I had seen the prices of dual lands in that store in Gotheburg, the personal value of my Clones and the joy they gave to my games was more than any cards he could offer. I still have those three clones today. 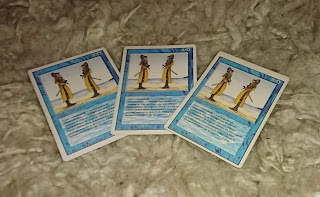 What happened next are many stories of life, friendship, and kitchen table Magic. Ice Age was released and we found out about Polar Kraken and Leviathan; a 4th edition card we somehow had missed earlier. We learned of Vesuvan Doppelganger, to this day my favorite creature in Magic next to Juzam Djinn. The mysteries of Magic grew a little smaller as our community grew a little bigger and we ventured more and more into the city of Gothenburg to play. I eventually got my hands on two Vesuvan Doppelgangers, a Deflection and a Mana Drain to make my blue deck a glory to behold.

I traded away the Mana Drain for an Underworld Dreams, but the day after that my deck got stolen. It was not the first nor the last time I had cards stolen back in the 90s, but it was one of the more heartfelt ones. It would take me almost 15 years before I got another Doppelganger, this time for my ventures in Old School Magic. I upgraded it to black borders five years ago, and to this day it has a place whenever I play a blue deck in 93/94. 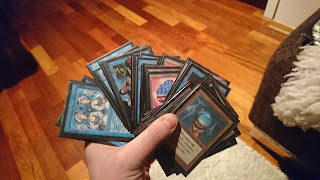 Glory be to the Doppelganger, but in the end it was Clone who showcased the ability to most players. Clone is truly one of the most iconic cards from the early days of Magic. It is one of very few cards I can think of that got proper homage to the original iconic art when it was reprinted many years later. You can't say that about Sol Ring, Hypnotic Specter or Juggernaut from that same era. 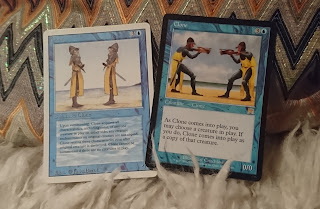 Clone has given me a lot of great victories, but a few shame-inducing mishaps as well. One evening in 2014 I got unusually drunk. I woke up the morning after with a heavy hangover, but as I puzzled together the pieces of the evening before I couldn't recall doing anything stupid at the party I attended. I wandered around in my apartment in haze for an hour before I realized that I had gone online to drunk-shop Magic cards. I checked my emails and saw a list of the cards I had bought; mostly harmless (though kinda odd) things like eight Uncle Istvan.

But then I found what had triggered my shopping; I had found a Summer Magic Clone which I had to get my hands on. It was the most money I had payed for a single purchase thus far (I guess that I mostly had been prone to buy small and trade up before) and my account balance showed that I had made a costly blunder. I presume that it might be slightly cheaper these days, as Summer cards have become much more abundant in the last couple of years, but I guess that it is fun to have one of the Edgar cards that most certaily came from a pack. 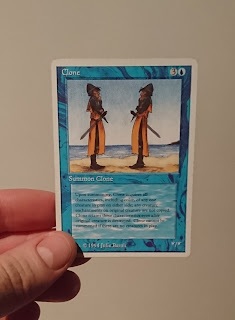 I felt shameful over buying it for the next week or so. It was money I couldn't afford to spend at the time. But when the card eventually arrived I could only smile. I have vehemently promised myself not to buy cards while drunk anymore, but thanks to my bad judgement I have another Clone with a story, just like the ones I've kept from Revised. It has seen a lot of play since I got it, both during 93/94 Highlander tournaments and in my crappy Biovisionary deck. That Clone is the only Summer Magic card I own, and if I'm only going to have one, I couldn't ask for a better. All these years later, it feels cool to have completed the journey and have a "linear playset" of Clone, with one from each Swedish-legal expansion in 93/94. 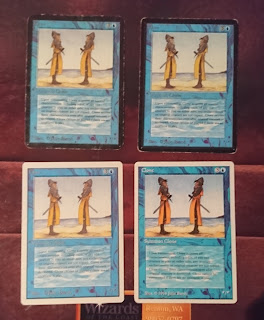 Apart from tearing up kitchen tables, Clone was played in the first deck that won the Magic World Championship in 1994. I can't say if that was the best card for that particular deck, but it is never the less something to consider.


These days a Clone on the battlefield is a rare sight to behold. I've seen it played in the odd Merfolk list and sometimes to top the curve in Suicide Blue, but that's about it. I believe there are more stories to be told from the two pondering soldiers. It might not be as raw in its power as Serendib Efreet, or as swift as Mahamothi Djinn, but it will always stand its ground as the best creature on the battlefield. In an era where people keep exploring the fringes of the 93/94 card pool, I look forward to see more people experience the subtle power of Clone.
Posted by Jonas T at 4:28 pm